Birds of Prey (and the Fantabulous Emancipation of One Harley Quinn), or simply just Birds of Prey, is in theaters and audiences can’t get enough of Margo Robbie’s Harley Quinn. But whichever version of Dr. Harleen Quinzel you prefer, there’s something for everyone on Entertainment Earth! Check out this list of great Harley Quinn merch:

Entertainment Earth Exclusive Collector Cards! From the streets of Gotham to the silver screen, Harley Quinn is gearing up for another thrilling adventure in Birds of Prey (and the Fantabulous Emancipation of One Harley Quinn). Share in the mayhem with fun Pop! Vinyl figures and collectible cards of your favorite characters, including this Birds of Prey Harley Quinn Roller Derby Pop! Vinyl Figure with Collectible Card – Entertainment Earth Exclusive that shows Harley in her roller-derby outfit. She measures approximately 3 3/4-inches tall and comes packaged in a window display box with one randomly selected limited edition card. Get yours while you still can!

Available only at Entertainment Earth, this Birds of Prey Pop! Vinyl figure includes one limited edition collectible trading card inside the Pop! box. Complete your collection by assembling the entire set, including the rare and super-rare holographic chase versions of each character card! 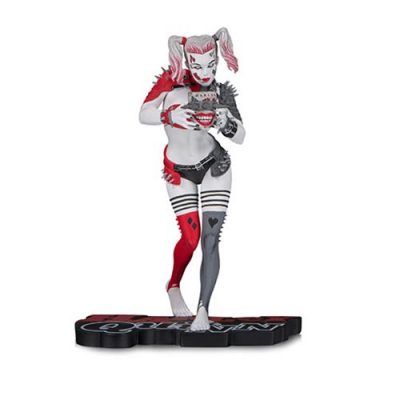 Cast in polyresin, this 7-inch tall Harley Quinn Red White and Black Metal Harley Quinn by Greg Horn Statue is based on Horn’s variant cover for Dark Nights: Metal. Harley wears a haunting mask, walks barefoot, and has traded her mallet for the face of the Batman Who Laughs to create a wholly unique and nightmarish addition to the Red, White, and Black collection. She’s a limited edition of 5,000 pieces.

Greg Horn’s bold, highly detailed style has helped him become one of the most recognizable cover artists in comics today. His take on a Harley Quinn joined with the mysterious Batman Who Laughs is a visceral delight for fans of the character!

Play for keeps with the poster girl for chaos, Harley Quinn! This One:12 Collective: Playing for Keeps Edition Previews Exclusive Harley Quinn features an original punk spin on her classic black and red outfit! Rocking a shaved head, spiked helmet, and incredibly detailed biker jacket and boots, this Harley is ready to shred with some heavy artillery! Along with her classic mallet, included are a knife, rocket launcher with blast FX, machine gun with removable ammo clips, eight interchangeable hands, alternate grinning face, and a Joker doll accessory! Each One:12 Collective Harley Quinn figure comes with a display base with adjustable display post, and comes packaged in a branded, collectible tin box!

Birds of Prey: And the Fantabulous Emancipation of One Harley Quinn SH Figuarts Action Figure

From the animated action film that features Batman traveling to the Sengoku period of Japan, Batman Ninja, comes the Harley Quinn Sengoku Edition Nendoroid Action Figure! Wearing her Japanese-style outfit and fully articulated, allowing for all sorts of different posing options, Harley comes with both a standard faceplate as well as an audacious smile that shows off her crazier side. The Nendoroid comes with two weapons including her hammer (made in the image of a rattle drum) for close combat, as well as her iconic gun for long-range combat. Her unique outfit with alternating colors on either side has also been faithfully captured, and her twintails are fitted with joints to easily create dynamic scenes in adorable Nendoroid size. Stands roughly 4-inches tall.