Rock on with Harley Quinn in This SDCC Exclusive 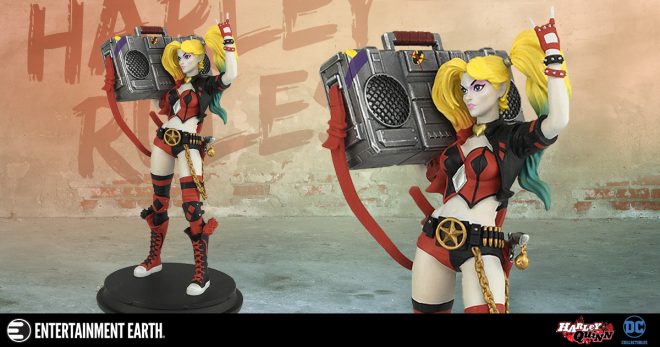 Rock out with Harley Quinn with this new DC Rebirth Harley Quinn Boombox Statue – SDCC Exclusive! This statue is an SDCC exclusive! Don’t have a ticket? Keep reading to find out how you might be able to get one!

his statue comes straight from the DC Rebirth Harley Quinn #1 variant cover by artist Carlos D’Anda. This cover is named “Big Wheels” for the three wheel souped up bike Harley’s standing over. She’s decked out in her own style metal gear and holding an oversized boombox on her shoulder. Her left hand displaying the “rock on” hand sign and giving some serious attitude.

This statue has serious rock ‘n roll style! The red and black details are a subtle nod to her original style but this isn’t your mama’s Harley Quinn! She’s ready to get her jam on with short shorts, knee pads, a crop top and crop jacket. On the back of her jacket, the Joker is behind bars showing that the Maid of Mischief is the one in charge of Gotham’s seedy underground. She shows her softer side with roses that grace the top of her lace-up knee high sneakers but that doesn’t mean she’s be taken lightly. She’s packing some serious heat and a large knife on her belt will make any passerby nervous.

With one eyebrow raised her expression is confident and will intimidate any passerby who even thinks about asking her to turn her music down. I know I would just compliment her on her music choice if I saw her walking by.

Looking to add some serious attitude to your collection and show off your inner rock star? Look no further than this highly detailed hand painted statue. Each statue is individually numbered and comes with its own certificate authenticity as a limited run of 2,500 pieces. It will initially be sold exclusively at San Diego Comic-Con 2017 but the remaining pieces will go to those who pre-order in a first come first serve fashion. Don’t miss your opportunity to own your chance to rock on with this Harley Quinn statue and pre-order now!