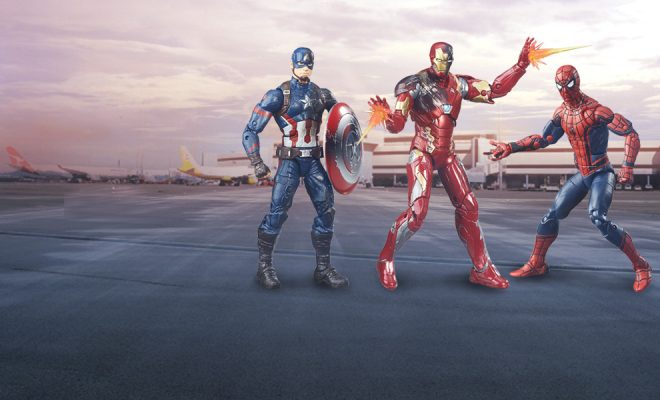 If you’re ready for that chatty web-slinger, then you’ll definitely love the world debut of the first action figure for Tom Holland’s Spider-Man, presented by the one and only Hasbro. And we have the first look for you!

The Captain America: Civil War Marvel Legends Spider-Man, Captain America, and Iron Man Set features our titular hero in battle-damaged red, white, and blue; his former ally-turned-adversary Iron Man looking like he stepped right out of the fight; and your friendly neighborhood Spider-Man in his brand-new costume.

Each figure measures 6-inches tall and boasts magnificent detail, which will certainly make them stand out on your shelf alongside the rest of your Marvel Legends collection – or if this is your first foray into the Marvel Legends world, what a great place to start!

They sport at least 20 points of articulation, as well as character-specific accessories, including alternate heads for Cap and Iron Man, Cap’s shield, and blast effects for Iron Man.

Get this incredible set at Entertainment Earth first, with an expected arrival of August!