Whether you’re a niche collector of vehicles or a generalist, Star Wars fans everywhere were extremely excited when Hasbro revealed their most ambitious and awe-inspiring Star Wars vehicle yet. Masters of Star Wars lore know it as the Khetanna, but anyone who’s ever seen Star Wars: Return of the Jedi will recognize it as Jabba’s Sail Barge.

Although the long history of Kenner and Hasbro Star Wars toys has seen plenty of impressive vehicles, the ship on which the “vile gangster” Jabba and his cronies met their demise has never been among them.

The Titanic of the Star Wars Universe, Inside and Out 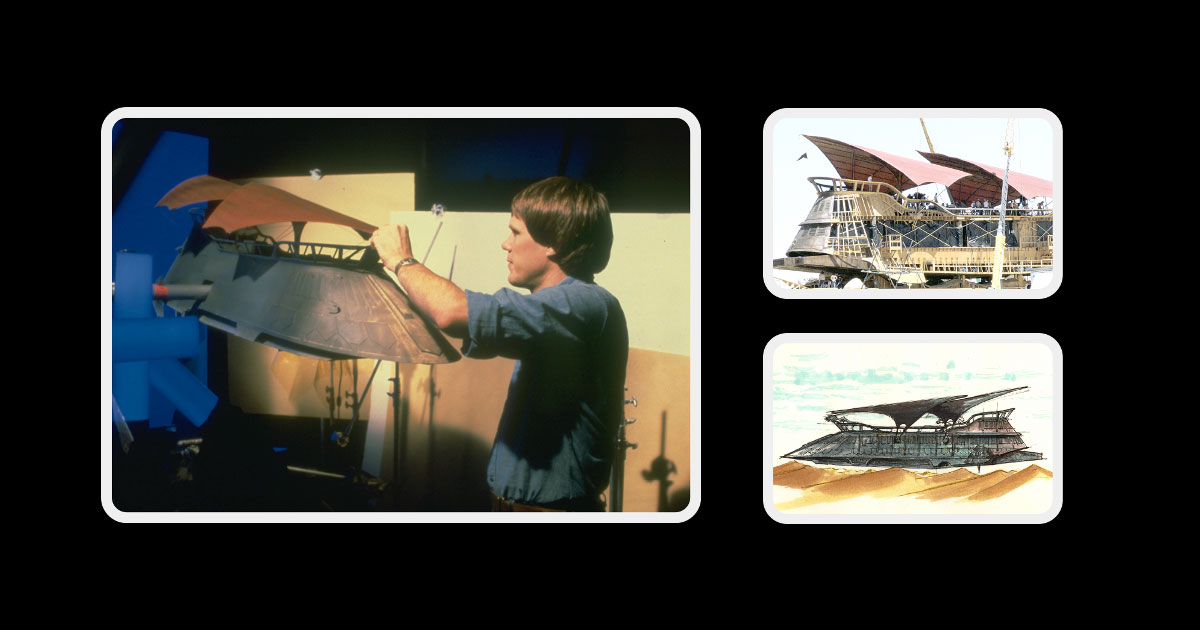 Jabba’s Sail Barge isn’t on screen all that long in Episode VI – only about seven minutes pass from our first sight of it to its fiery destruction – but the big ship makes a big impression. Packed with the wildest assortment of partying aliens we’d seen since the Mos Eisley cantina, the huge hovership – just like its loathsome master – is strong and intimidating, but ultimately proves no match for Luke Skywalker’s master plan!

The prototype on display in Hasbro’s Toy Fair showroom drew admiring onlookers all weekend long. Designed by Senior Principal Product Designer Mark Boudreaux from on-set photography, the Lucasfilm digital archives, and some imaginative extrapolation, the toy Sail Barge measures 49.35-inches long (just over four feet), 17.01-inches high (measured to the tip of its sails), and 14.64-inches wide, and weighs in at 13.89 pounds (about as heavy as a gallon of paint – depending on your physical fitness, you might get a workout trying to find the perfect spot in your collection).

Boudreaux and his team haven’t spared any effort crafting this Sail Barge, which they began working on fall of last year. There are fan-delighting details from stem to stern:

The more you think about it, Jabba’s Sail Barge is the Titanic of Star Wars. It’s on a voyage toward destruction – but it sails there in spectacular style!

(It also reminds me of the War Rocket Ajax, too, from the Flash Gordon universe. When will these big-time bad guys ever learn that flying luxury fortresses never reach happy destinations?)

The Fate of Jabba’s Sail Barge is in Your Hands

Hasbro’s Barge is certain to be, as Evans says, a “collection-defining” centerpiece – provided HasLab raises the money needed to commit to full production. The crowdsourcing platform needs to garner at least 5,000 pre-orders at $500 each by April 3, 2018, in order to make this breathtakingly impressive toy a reality. If you pledge the money you won’t be charged for the Barge immediately, instead, you will be charged the full amount as soon as the deadline passes in Spring 2018. If it reaches its goal, it should ship in February 2019. You can check https://www.hasbrolab.com/#updates for the latest progress reports.

A wise pilot once said, “Never tell me the odds”… but I think HasLab’s inaugural effort has a good shot at success. Why? Stuart Wells, writing in his book A Universe of Star Wars Collectibles, offers the clue: “Vehicles are much more important in Star Wars than in most other action figure lines. The 3 3/4[-inch] size of the figures allowed the production of vehicles which were large enough to accommodate several figures, and so the larger vehicles became virtual playsets for the figures.”

I’m a ’70s fan who vividly remembers playing with several ships Kenner produced. I rolled Luke Skywalker’s landspeeder across my bedroom floor. I popped the “solar panel” wings off a TIE fighter. And I hid Han and Chewie in the Millennium Falcon’s smuggling compartment many times.

And it’s not just first-generation fans who’ve had the pleasure of playing with vehicles during the history of Star Wars toys. The prequel era brought battle droid transports, Gungan submarines, Jedi starfighters, and more. And each new movie introduces modes of transport that make great toys, such as Rey’s speeder in Star Wars: The Force Awakens, the U-wings of Rogue One: A Star Wars Story, and Kylo Ren’s TIE Silencer from Star Wars: The Last Jedi. But nothing is as cool as Jabba’s Sail Barge.

UPDATE: The once-mighty Khetanna rises from the sandy wastes of the Dune Sea and has finally sailed into the collections of enthusiasts! Check out our unboxing video: