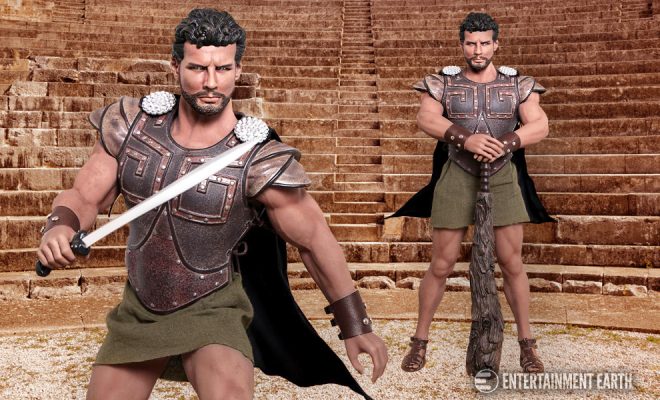 In the old days, Gods weren’t exactly the kind of people you’d want to meet on the street. Usually, if you ran into a god, your day was about to get a lot worse from that point on. Zeus, for example, was a philandering super being with an insatiable desire for mortal women and for making his wife, Hera, jealous—he was, in many ways, everything that is wrong with man. When one of his trysts produced a son, the half-god, half-mortal Hercules became the bane of Hera’s existence. Hera tried to kill the baby boy, in order to get back at his father, but she quickly discovered that Hercules was not easily bested. A born fighter and a powerful hero, Hercules became to Greek myth everything his father was not: an ideal version of man.

The legend of Hercules went way beyond his own time and well into ours. Depicted time and time again in Hollywood productions, Hercules continues to inspire. There is no actor who better defined the role of Hercules and of the modern action star as Steve Reeves. Now Executive Replicas and Phicen Ltd are proud to honor the work and inspiration of Steve Reeves with this highly detailed Hercules Steve Reeves 1:6 Scale Action Figure.

This authorized action figure is incredibly comprehensive in scope. The seamless muscle body was modeled after Steve Reeves, one of the first modern body builders. He comes with a red tunic, as seen on the iconic promotional artwork, an embellished waist belt, iconic sandals, studded wrist guards, studded battle vest, short cape with medallions, ancient Greek sword, metal chains with cuffs, war club, and an action figure stand. This is truly a collectible with details and accessories to spare!

The truth of the matter is that without Steve Reeves, there would be no Schwarzenegger, Ferrigno, or Stallone—at least not as we know them. His inspirational physique and acting work made the action stars of the 80s and 90s possible. Reeves’ acting career spanned three decades, but he was just as iconic off the screen as a bodybuilding champion, a philanthropist, and a huge voice for heath and fitness.

This isn’t the kind of action figure that comes around every day. This is a collectible that is made with care and concern for a hero that continues to inspire many worldwide. You can pre-order this amazing piece at Entertainment Earth today and get free U.S. shipping!