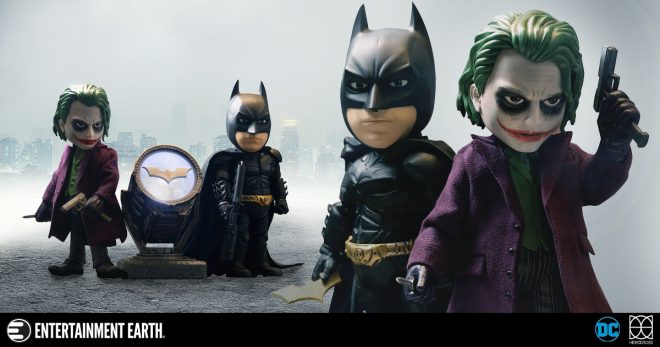 This set brings the immortal battle between chaos and justice to life in a brand-new way! The Dark Knight Gotham City Hybrid Metal Figuration – 045 Batman Joker Action Figure Box Set brings character and detail into balance. The dark tone of what is widely called the greatest Batman movie of all time is treated to a caricature likeness that is impressive in quality and detail.

Each of these spirited figures has an amazing 14-points of articulation. With interchangeable hands, a bazooka, an automatic pistol, and an intimidating knife, this Joker means business.  And, in order to try and bring this crazy criminal to justice, Batman has brought along his Batarang, a Grapnel Gun, and an Electric Gun. He can also be switched to the light up “sonar-vision” mode that was featured in the 2008 movie.

This highly detailed box set also includes a light-up Bat-Signal that projects the Bat emblem onto any surface. Gotham City will never be the same after these two clash, and your collection will also be changed forever. Order your set today from Entertainment Earth!