Now, let’s see what happened when Star Trek beamed from the small to the silver screen. For almost a decade, fans had rallied around the slogan, “Star Trek Lives!” Amazingly, it did.

It just took a while for the toys to catch up.

In its high sci-fi concepts, lingering effects shots and leisurely running time, Star Trek: The Motion Picture (1979) aimed to emulate 2001: A Space Odyssey. But in its merchandising, TMP wanted to mimic the space movie that helped give Trek its cinematic shot.

Hoping to create a Star Wars-sized splash (and also to raise money for finishing the film), Paramount merchandising exec Dawn Steel struck as many licensing deals as possible. Her dramatic, live “beam-in” to a presentation for potential licensees helped secure her reputation as a marketing miracle worker. (She would go on to become the first woman to helm a major motion picture studio at Columbia Pictures.)

The meals’ “prizes” were molded plastic rings and bracelets, a board game, glittery iron-on transfers (très ’70s), and a “video communicator” through which kids could scroll Star Trek comic strips.

So there they were, among the French fries: the first Star Trek movie toys.

But a Trek takeover of America’s toy store aisles wasn’t to be.

Mego Corporation did give it the old Starfleet Academy try, with several 3-3/4-inch fully painted action figures, including five of the film’s blink-and-you-miss-’em exotic extraterrestrials.

But neither Mego’s Star Trek toys nor a new, vacu-formed plastic bridge playset could replicate past success. According to Mego experts, Ilia action figures hung on toy store pegs well into the ’80s.

In MB’s 1979 Star Trek game—entitled, with jaw-dropping unoriginality, Star Trek Game—two  to four players, age eight to adult, race small plastic starships across moveable, triangular “space sectors” (according to the instructions, the board had over 3 million possible arrangements) in order to chart “alien phenomena.” The first player to complete three successful missions wins and is named “Star Fleet Commander.” (Seems like the Fleet is setting the leadership bar too low, if you ask me.)

MB also offered some battery-operated (but not included) Trek toys through its South Bend electronics division.

But for sheer coolness, the Electronic U.S.S. Enterprise blew the phasers away. This 20-inch replica featured a flashing red bridge light and “throbbing warp engine sounds.” Best of all, you could mix and match its pieces to build five different ships. 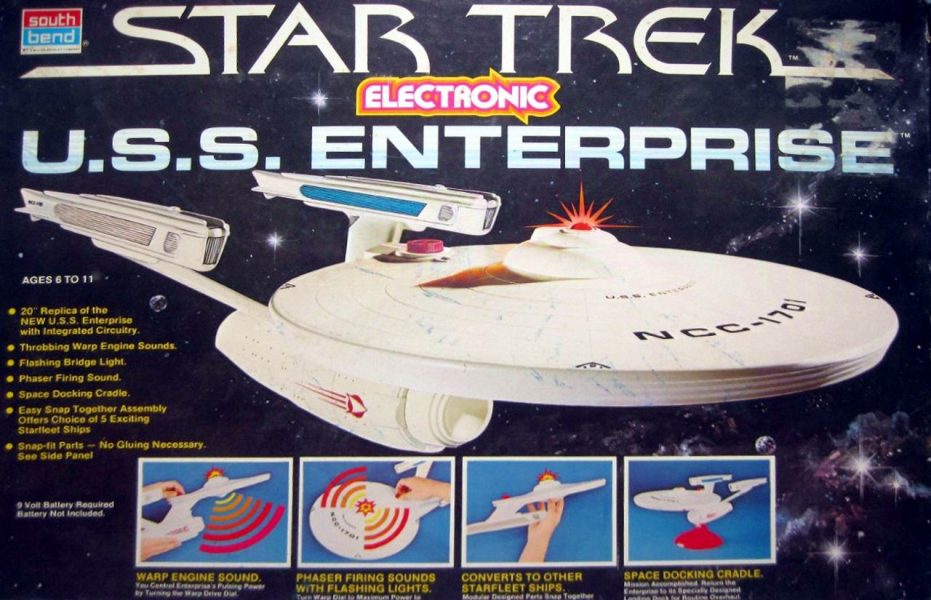 But apparently not even Milton Bradley had the power to make Star Trek movie toys truly catch on. When Star Trek II: The Wrath of Khan arrived in 1982, no new toy line helped promote it. (Collins Industrial did sell a The Wrath of Khan digital wristwatch that doubled as a video game—“complete with space war sound effects!,” an ad in Starlog promised—but it was really just a slow-moving Space Invaders knockoff.)

Only a smattering of toys accompanied each new Trek movie, and these toys weren’t always too impressive. For example, the Ertl Company brought out a few 3-3/4-inch, ten point-articulated but crudely painted action figures and some rather plain die-cast model starships for Star Trek III: The Search for Spock (1984).  Some of these ships got a second life, thanks to new stickers and paint jobs, with Star Trek V: The Final Frontier (1989).

But no Star Trek V toy – and it must be a toy; it hardly seems a practical culinary item – can steal the spotlight from Kraft’s marshmallow dispenser.

With attached fork and spoon, no less. Because, you know, you wouldn’t want to eat your marshmallows with your hands.

Fans would have to wait for the direct market, decades later, to bring Star Trek collectibles online that worthily represented the original Trek cast’s motion pictures. Companies like Diamond Select, with its Khan action figures and Klingon disruptor replicas, Eaglemoss Publications, with its starship die-cast vehicles, and Bif Bang Pow!, with its Star Trek bobble heads, are now doing admirable jobs of filling in the gaps from this phase of Star Trek toy history.

Fortunately, when Trek returned to television, it brought plenty of toys with it.

Coming in Part 3: The next generations of Star Trek toys!

What’s your favorite toy from the original Star Trek cast movie era? Let us know in the comments section below!