The (mercifully unused) lyrics Gene Roddenberry wrote for Alexander Courage’s The Original Series theme prophesy that this “star trek will go on forever.” Fifty years later, it shows no signs of ending—but our history of Star Trek toys must.

We’ve seen the earliest model kits and Mego dolls. We saw the movie-related toys come to market in fits and starts. Most recently, we saw Star Trek hit big at toy stores everywhere with Playmates Star Trek action figures and starship replicas throughout the ‘90s.

In 1998, diminishing sales led to the cancellation of Playmates’ license. But when director J.J. Abrams’ rebooted, lens-flare filled 23rd century came within scanning range, Trek toys tried to make a comeback—starting where they had successfully gone before, three decades earlier: fast food restaurants.

Have It Trek’s Way: The 2009 Burger King Promotion

These Star Trek toys were part of the first major fast food merchandising push since 1984’s Star Trek III drinking glasses, also at Burger King (unless you count the buck-off coupons at Del Taco for Star Trek: Nemesis in 2002 – I wouldn’t). How much the promotion helped drive the movie’s considerable box office is anyone’s guess, but it did help put Trek squarely back in the spotlight.

A renewed license in hand, Playmates planned on having the major piece of the revived Trek toy action. The crown jewel in its new line was a toy Enterprise. A full 14 1/2-inches, stem to stern, its bridge “dome” doubles as a button that activates strobe lights, sound effects, and dialogue clips.

The ship looks fantastic on its translucent Starfleet Delta display stand, but it really begs to be held in excited kids’ hands as they race around the backyard, exploring strange new worlds (or at least terrorizing the family dog).

Playmates also released 3-3/4 and 6-inch articulated and accessorized action figures, as well as four 12-inch collector figures in cloth and vinyl costumes like the Mego figures of old. But ultimately Trek toys from Playmates were delayed, and then canceled.

Hasbro got the nod to manufacture toys for Star Trek Into Darkness (2013). Its Enterprise had do-it-yourself appeal. The 432-piece Kre-O construction measures 18-inches when assembled, and was the first Kre-O set with lighted parts (warp nacelles and photon torpedo launcher). The top of the saucer section swings open to reveal the bridge, ready to be manned by your “Kreons” (miniature articulated figures).

Other Kre-O releases included a light-up Klingon Bird-of-Prey, three light-up building playsets, and four “micro-build” ships with light-up display stands. Commendation to Hasbro for getting so many illuminated toys out of a film with “darkness” in the title!

Hasbro and Bad Robot co-produced a stop-motion short that shows the Kre-O Enterprise and its Kreon crew in action:

(I’m not saying it’s necessarily a better movie than Into Darkness… but it sure was more fun!)

Star Trek Beyond Toys… And Beyond!

This summer’s Trek film hasn’t left a whole lot of Star Trek Beyond toys in its wake. For the last few years, the Funko Pop! Vinyl figure line has included characters from the original series and The Next Generation; this year, several from new film joined the line, including Krall and Jaylah (she likes the beats and the shouting).

But the franchise’s golden anniversary this year has sparked a gold-pressed latinum rush of Star Trek toys and collectibles. Following up on its Starfleet Barbie and Ken from Trek’s 30th anniversary, for example, Mattel has issued 50th anniversary Kirk, Spock and Uhura dolls. 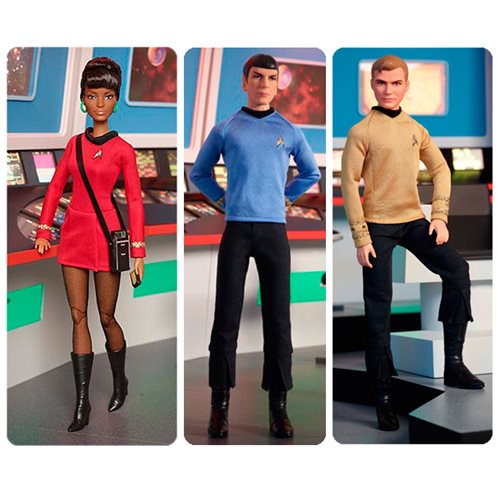 Who needs a Malibu dream car when you’ve got a faster-than-light starship?

Mega Bloks is also going retro with a terrifically detailed Enterprise bridge playset. Boasting nearly 600 pieces, four micro-action figures (Kirk—in his variant green wraparound, no less—Spock, Uhura, and Sulu), turbolift doors that open, a captain’s chair that rotates and more, the set captures the look and feel of the classic episodes. You can almost hear the computer’s beeps and the warp engines’ roar!

If you want a truly unique Trek anniversary bridge with no assembly required, Bif Bang Pow! has an Entertainment Earth Exclusive Star Trek: The Original Series Pin Mate Wooden Enterprise Bridge Playset that scores high on the coolness and cuteness scales. Limited to only 500 pieces, the playset comes with two-inch tall figures of Kirk variant (in green tunic), Spock variant (with tricorder), and a rare Nurse Chapel that are uniquely numbered on the bottom (as well as the packaging). Their 360-degree decorated setting, which swings open and shut for ease of play (or display), is admirably true to what’s seen on screen.

These items are only a fraction of the toys marking Trek’s big birthday. Between this year’s festivities and next January’s debut of Star Trek: Discovery, it’s a safe bet the history of Star Trek toys is far from finished.

I know our overview of Trek toys has been far from definitive. We’ve zoomed past whole categories of playthings and collectibles that have their devotees. We didn’t cuddle with any plush figures or stuffed animals. We skipped over board games and video games. And, given Star Trek’s global reach and its affirmation of IDIC (Infinite Diversity in Infinite Combinations), we’re regretful to cover mostly the U.S. market.

But hopefully this brief history of Star Trek toys has inspired you to pick up something fun as you celebrate the franchise’s 50th birthday. We have plenty of suggestions at our Entertainment Earth Star Trek shop – from die-cast model ships to DIY model kits, from action figures to bobble heads, from toy phasers to playing cards.

Whatever toy you choose, make it one that stokes your sense of wonder and fires your imagination, as Star Trek itself has done for half a century.