How is it October already? Not that I’m complaining (I’m complaining) BUT…that does mean it’s almost 2020 (weird). And it also means it’s almost time for Halloween (fun!). And how perfectly-timed are these new Funko Pop! Horror Vinyl Figures?

Let’s take a look at the new figures!

Creep This Into Your Funko Pop! Collection 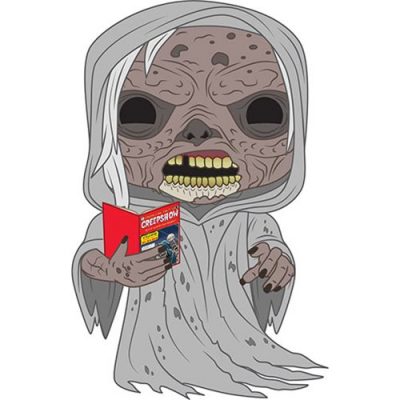 Creepshow is really creepy. The Creep is really creepy. Methinks they titled and named this correctly. Straight from the 1982 anthology movie comes this adorable little Funko Pop! And, guess what? There’s a new Creepshow series on Shudder. Watch the trailer here! It’s all Stephen King so you know it’s going to be good!

So…you can watch Creepshow your The Creep Funko Pop! Hooray!

Harold The Scarecrow is a Scary Story to Tell in the Dark. But, Bring a Flashlight!

In real life, we’d say you should avoid Harold The Scarecrow at all costs! However, as far as this Harold Funko Pop! goes? We say…put him in your house! Or wherever it is that you keep your collectible items.

Also, maybe keep him out of your bedroom? If he’s going to walk around at night it’s probably better he does it on his own time and out of your sight.

Get your very own scary, scary, Harold now!

The Jangly Man Funko Pop! Is Here To Serve You Scares!

Jangly Man is a terrifying hybrid creature. He’s not someone you’d like to run into in a dark alley. Or in a well-lit alley, for that matter. Or anywhere.

But, for a horror fan, this Jangly Man Funko Pop! is a perfect fit into any creepy collection. Or put him amongst your cute, precious, happy little figures. That’ll be fun!

Get your very own Jangly Man Funko Pop!

Jeepers Creepers…Where’d Ya Get That Funko?

Jeepers Creepers is one of my favorite horror movies and The Creeper has been a major guest star in a few of my dreams, er, nightmares.

This Funko Pop! is ready to get ya…and comes equipped with his hat. And ax. Fun, right? Not gonna lie…I kind of want to keep him in my pocket because he kind of looks like a cute, little grandpa? Picking up what I’m putting down?

Add all these creepy killers to your collection today!

Collectibles Pop Vinyl
Related ItemsFunkoHorrorPop!Vinyl
← Previous Story You Ain’t Never Had a Friend like Princess Jasmine
Next Story → Let’s Get Down to the Nitty Gritty