Train Your Very Own Dragon with These Playmobil Playsets! Which Will You Choose? 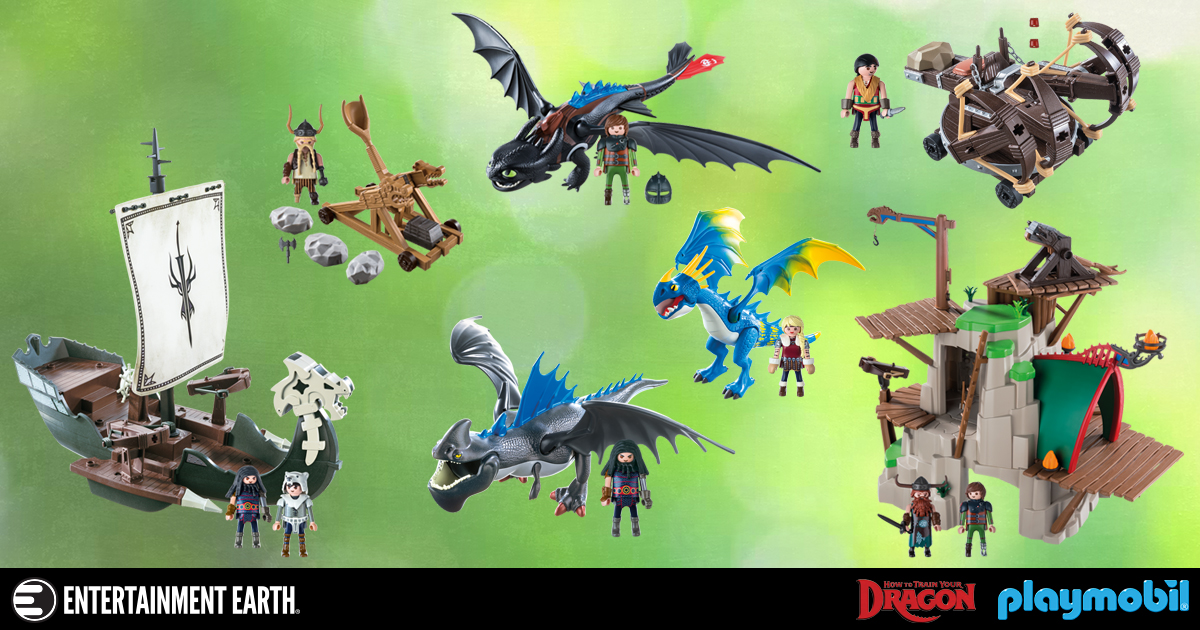 Both kids and kids at heart will love these newest additions to the Playmobil line. Let your imagination run wild and construct settlements, ships, and, of course, dragons!

First up, battle the fiercest enemy yet with this How to Train Your Dragon Dragos Ship Playset. This floating ship has everything Drago needs for his devious attempts to trap dragons. The dragon cage with lock is used to contain captured dragons, while the functioning crossbows defend against any incoming fire. This set includes Drago, one other figure, spears, torch, and other accessories.

Everyone’s favorite Night Fury is available in this must-have How to Train Your Dragon Hiccup and Toothless Playset. Toothless can shoot a blue fire dart from his mouth, keeping his enemies at bay. With illuminating back spikes, Toothless and Hiccup will do whatever it takes to protect Berk and its dragon friends. This set includes Hiccup, Toothless, blue fire dart, flame sword, helmet, and other accessories.

Prepare for battle with this How to Train Your Dragon Eret with Fire Ballista Playset! Eret is a fierce enemy to behold with his Ballista equipped with four crossbows. This set also includes Viking accessories.

Join the most loyal Viking around as he defends Berk with his trusty catapult. Take home the How to Train Your Dragon Gobber with Catapult Playset. Known for his skills of making dragon-friendly devices, his loyalty to Berk and their fire-breathing friends are no match for any enemy. This set also includes boulders and Viking helmet.

Head out on an adventure with this How to Train Your Dragon Astrid and Stormfly Playset. This playset includes Astrid, Stormfly, a saddle, and a battle axe. Astrid can use the saddle to sit on Stormfly’s back and when the battle is won, the saddle can be removed.

Visit the island of Berk with this How to Train Your Dragon Knight Fortress Playset. This two-story fortress features a functioning catapult capable of defending the fortress from high above, a fiery crossbow ready to strike down enemies, and a functioning pulley to transport supplies. At night, the functioning torch and Viking statue illuminate the fortress. Along with Stoick and Hiccup, this set also includes awning, trap-door, two dragons, torches, boulders, and tons of other accessories.

These Playsets will be available in October 2017. Place your pre-orders with Entertainment Earth now before these dragons fly away for good!

Action Figures Collectibles
Related ItemsAction FigureHow To Train Your DragonPlaymobil
← Previous Story The Newest Ron English Vinyl Figure is Sickly Sweet
Next Story → Bring Your Fantasies to Life with These Playmobil Items – What Special PLUS Figure Awaits Inside?