The Brainy Ninja Turtle Makes a Colorful and Lively Statue 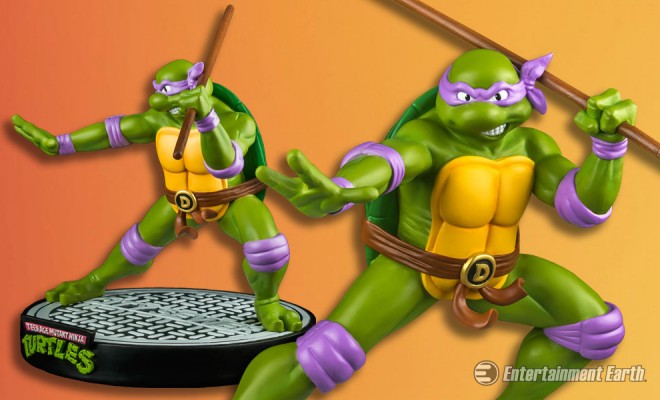 If you’re as smart as this crime-fighting turtle, then checking out the Teenage Mutant Ninja Turtles Donatello Statue from Ikon Collectibles will be a no-brainer!

Leaving the street smarts to his brothers, Donnie is all technobabble and engineering. Don’t count him out of the fight, though – with his trusty bō staff and aptitude for skill and strategy, he’s a formidable opponent.

This statue shows he’s ready for whatever’s thrown his way. With fluid movement incorporated into the sculpt, Donatello leans away with one arm outstretched and the other holding his staff behind his head. His familiar purple bandanna and accessories complete the look.

Eye-popping and colorful, the statue is one of the most faithful and awesome out there for TMNT fans! Its detail will definitely impress.

The statue measures 15-inches tall and comes on a round base sporting the TMNT logo.

Donatello is currently available for pre-order at Entertainment Earth, with an expected arrival of January 2016 and free shipping.