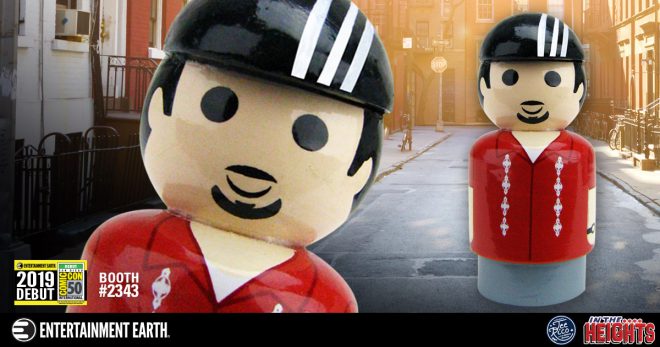 Lights up on Washington Heights

Set in New York City’s Washington Heights, In the Heights follows the residents of a close-knit neighborhood community over the course of 3 eventful days. Conceived and co-written by Miranda (with the book by Quiara Alegría Hudes), the show revolutionized the traditional Broadway style with its “barrio” sound – including salsa rhythms, Latin beats, and rap! The show’s characters struggle with love, identity, and financial pressures, amidst the news that one of their own has just purchased a winning lottery ticket. The characters are led by Usnavi de la Vega (played by Miranda in the musical’s Original Broadway Cast), a local bodega owner considering closing up shop and returning home to the Dominican Republic. Help Usnavi find home with your very own In the Heights Usnavi Pin Mates Wooden Collectible!

It Won’t Be Long Now

Whether you’re familiar with the musical or just a fan of Lin-Manuel Miranda, the 2-inch In the Heights Usnavi Pin Mates Wooden Collectible is a perfect addition to your growing Lin-Manuel Miranda Pin Mates collection. Special attention was paid to giving this retro-style figure the same look and feel of collectible figures from the 1960s and 1970s. Numbered S09 in the Pin Mates Silver Series, the figure is individually carded. And remember, this SDCC Debut is unique in that it will be sold to SDCC attendees on the show floor before anyone else and will have the official SDCC Debut sticker on the package. In case you’re wondering, yes, this charming collectible is officially licensed by Lin-Manuel Miranda himself and TeeRico.

The first opportunity for fans to grab this exclusive In the Heights Usnavi Pin Mates Wooden Collectible will be at San Diego Comic-Con on July 18, 2019, at the Entertainment Earth booth #2343.