The long-awaited Incredibles 2 has finally hit theaters and your favorite family of supers has returned! If you’re a fan of these iconic heroes, you’re going to need these toys before you head to the theater. Now move as quickly as Dash and order these incredible Incredibles collectibles now! (See what I did there?)

LEGO has been a staple of the toy collecting community since their inception. I can’t think of a kid who hasn’t had LEGO bricks while growing up or a parent who hasn’t stepped on one. Combine the infectious entertainment of LEGO with the amazing world of The Incredibles and you get these new LEGO playsets! The Great Home Escape features a set designed after a scene from the new movie and includes 3 mini-figures and a baby figure. Elastigirl’s Rooftop Pursuit again captures an iconic moment of the film and gives the builder the pieces to recreate the action. Finally, the Underminer Bank Heist set recreates the action of the Incredibles facing off with their foe the Underminer and includes his mini-figure along with two others. All three are LEGO Juniors sets, so they’re made for beginners and experts alike. 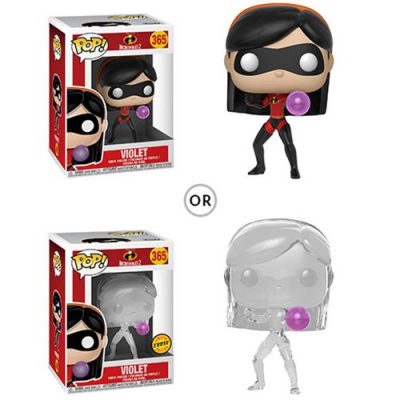 What product list would be complete without a Funko Pop! or two in the mix? The line-up for the first wave of Incredibles 2 Pop! figures includes Underminer (complete with his microphone), Violet (which features a clear Chase variant), Jack-Jack, Elastigirl, Dash, Frozone, Mr. Incredible, and the villainous Screenslaver.

These 4-inch tall figures are a blast from the past. With the Dash or Mr. Incredible figures, you just wind them up and let them go. Fun for kids and adults who remember wind-up toys of the past. Both figures are brightly painted for quality detail and promise fun for the kid in all of us.

When it comes to toys, size does NOT matter, as shown in this pack of die-cast metal mini-figures. Each figure stands about 1 2/3-inches tall and is made of 100% die-cast metal. The set includes Mr. Incredible, Elastigirl, Violet, Dash, and Metal Jack-Jack. The set is perfect for displaying around a computer monitor, on your entertainment stand, or pretty much anywhere you have a little desk space. While they might be tiny, the detail is exceptional.

Last but not least, this monster-sized action figure is the perfect way to close this product list out. Mr. Incredible stands 18-inches tall and looks every bit of the hero as he does on the screen. Painted beautifully to match his Incredibles costume from the movie, his legs and arms both move, and his head turns as well. As the father of the family, he stands tall and ready to protect the citizens of Metrovile or New Urbrem with his super-family at his side.

As you can there are plenty of options when it comes to finding the right Incredibles 2 product for you or your collectible loving family members. Act now, before some villainous collector buys them all up only to sell them at a much higher price! Muahahahahaha….ahem. Sorry, no one would ever do that…or would they?