In 1991, Marvel Comics published The Infinity Gauntlet, a six-issue series scripted by Jim Starlin and drawn by George Pérez and Ron Lim. This cosmic clash between life and death was a crowd-pleasing crossover. It featured a “who’s who” of Marvel heroes desperately fighting to stop Thanos, the ultimate nihilist, from destroying half the universe.

The series won instant acclaim as a modern Marvel classic. It set a new and astonishingly high standard for all comic book events to come, with its ambitious scope, compelling antihero, and emotional impact. 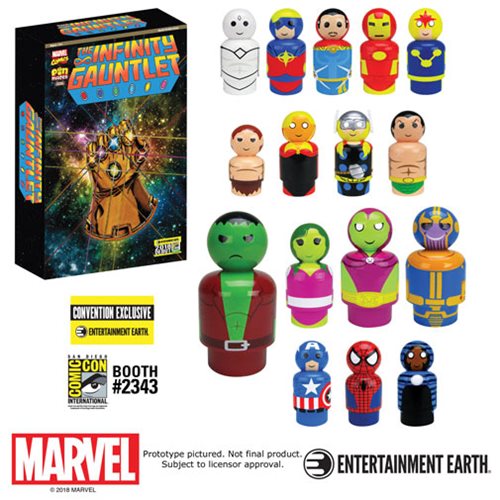 But you’ll also find champions who fought the good fight in print only: Quasar, Protector of the Universe (G03); super powered space cop Nova (G06); trouble-prone teleporter Pip the Troll (G08 – small but fierce at 1 3/4-inches tall); Adam Warlock (G09), who led the charge against Thanos in the comic; Namor the Sub-Mariner (G11); She-Hulk (G14 – a half-inch taller than most of her fellow Super Heroes); and Cloak, living portal to the Darkforce Dimension (G19).

Of course, this spectacular set couldn’t be complete without the Mad Titan himself (G20). Measuring 3-inches tall, Thanos is packaged on the reverse of the deluxe, fully illustrated window box in his memorable and mocking “Come and get me!” pose from the cover of The Infinity Gauntlet #4. For their part, the Avengers and their compatriots are packed in a recreation of issue #3’s instantly iconic “Call to Arms” cover. The box’s front, with its large illustration of the Infinity Gauntlet, evokes artwork gracing several of the storyline’s collected editions.

In addition to the Super Heroes above, Wolverine (Pin Mate™ number G18) and Cyclops (G13) joined Scarlet Witch (G12) in the battle against Thanos in The Infinity Gauntlet comic. All three of these heroes who fight for a world that fears them are on hand here, garbed in their distinctive 1990s costumes.

Restage The Infinity Gauntlet‘s bravura battle scenes in Pin Mate™ form on your desk or display shelf – and dream up some entirely new ones of your own – with these cosmically charming versions of many of Marvel’s mightiest characters!

The first opportunity for fans to grab both this Marvel’s Mutants Pin Mates™ Wooden Collectibles Set of 3 – Convention Exclusive and the Infinity Gauntlet Pin Mate™ Wooden Collectibles Set of 16 – Convention Exclusive will be at San Diego Comic-Con on July 19, 2018, at the Entertainment Earth booth #2343. Hurry – there are only 1,500 of the Mutants and 1,500 of the Infinity Gauntlet set available!

*NOTE: These items will first be sold during San Diego Comic-Con 2018 at the Entertainment Earth booth #2343. If supplies remain after the show, pre-orders will be filled and shipped to you then, in August 2018.