Josh Mayhem is a self taught artist who currently customizes designer toys for the collectibles enthusiast. He creates outstanding designs using model kits, and miscellaneous items on a wide variety of designer toys including Kidrobot Munnys, and Dunnys. We asked him for an interview and Josh came through. Check out the interview and the gallery below to find out more about his work. Make sure to check him out on Facebook, Instagram, and Twitter to keep up with his latest work!

Tell us about your beginnings in art and, specifically, toy art.

I’m a self taught artist. I’ve been drawing and painting my entire life. In my late adolescent and early teenage years I got pretty heavy into comic book art, creating my own stories and characters. I particularly liked Todd McFarlane’s art and was heavily influenced by his work. Even today his influence could still be seen in my custom toy art. Later on I became more focused on surrealism, perspective, and fantasy art.

I was given the opportunity to work at Toy Art Gallery in Hollywood while I was working on my first series of custom toy designs, and soon after I was invited to participate in my first group show at Crewest Gallery in Downtown LA in December of 2011. During an internship at TAG I learned the ins and outs of the designer toy scene, designer toy art shows, and was invited to participate in my first custom group show at TAG entitled “Bellicosity”, based off of Nathan Hamills “Belliscose Bunny” designer toy. My piece sold and soon afterwards the whole series started to sell, invites to shows started coming in, and eventually I started getting commissions. I left TAG in the summer of 2012 to get back into sales because of my growing family.

Are you a toy collector yourself? What have you collected over the years and how has that influenced your work?

I absolutely love collecting toys. It’s an addiction I’ve always had. I started with collecting Transformers when I was very young, as well as Hot Wheels and Micro Machines. When I was a bit older I started collecting G.I. Joes, hundreds of them, many of which I still have. I’ve always loved action figures because they’re just bad ass, and I think that translates into my art. Most of my custom pieces have parts taken from actions figures, are intricately detailed, and also have some form of a working component. These components could be functional lights, spring loaded weapons, move-able devices, multiple points of articulation, and removable elements that evoke the versatility and feel of an action figure while keeping the visual aesthetic of a designer toy.Of course I still collect action figures as well but mainly McFarlane Toys or anything that has a similarly detailed and intricate sculpt. Basically I’m just a big geek at heart.

How did Gundam modeling kits become a part of your work? Tell us about the evolution of your Gunnys – Gundam Munnys.

The idea of using Gundam modeling kits as part of my work literally just fell into my lap. Since I was previously creating custom toys using parts from other toys, and random or found objects, my friends started giving me things they were either going to throw out or donate which often times included toys.

One of my close friends had a table at his office where people would leave items they no longer wanted that they thought other people might want or need. One day he saw a box on the table labeled “Transformers” and upon looking through it he realized that it would probably be something that I could use for my art. The next time he saw me he surprised me with it. I felt like a kid at Christmas because not only did the box have a huge amount of Gundam kit pieces, but many of the kits were also complete.

Nowadays I mainly buy kits for the sole purpose of re-purposing them, but this has made me love and appreciate them even more, so I’m slowly buying extra kits here and there for my own personal collection.

Say a little more about the customization process. How do you develop designs and discern what pieces are needed? Does the process change when you’re using modeling kits versus other materials?

The way I develop designs is always different with every piece. With show pieces you need to work with a specific toy, or a specific theme, which is often times very challenging to blend well with your known artistic aesthetic. Sometimes I’m inspired to come up with something completely different from my normal style. For example at “Music to My Ears”, a music themed group show at TAG, I was inspired to turn an 8″ Dunny into a melting phonograph. At “Spring Forward”, a springtime themed group show at Kidrobot LA, I was inspired to make a psychedelic, flower topped 7″ Munny covered in rainbow raindrops. Commission pieces are great in that respect too. Often times I’m forced to think way outside the box as I’m working off of another persons idea which usually results in creating something I normally would never of thought of on my own.

Once I’ve come up with an idea I then go digging through my collection of random things. I strip parts out of my collection of toys and action figures I found on sale and buy for the sole purpose of using later for my work, or I go buy a toy that has the specific elements I’m looking for. For my pieces that have more of a aged metal and mechanical look I search for pieces that have sharp square and round edges that would look machine-like when painted silver and aged.

With my “Acid Rain” and “Blown Away” style pieces I have no set idea as to what colors are going to go where and I pretty much just let gravity do all the work. Those pieces are a breath of fresh air and are actually quite relaxing to make as I tend to be overly meticulous towards my attention to detail and symmetry in my other work. I guess you can say it’s my version of throwing paint at a canvas. 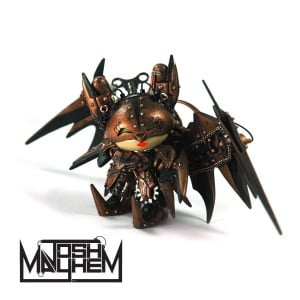 For my steam punk themed toys I look for pieces that remind me of that particular kind of aesthetic, strip gears and parts from watches and clocks I’ve picked up, and try to find copper or bronze metal pieces that already have that aged look. For both of those styles I always throw in wires I’ve saved from discarded electronics. Left over parts from previously used Gundam kits are usually included as well.

A Gundam themed toy will either revolve around one Gundam kit in particular, sometimes using a similar but brighter color scheme, or it will be a mash up using pieces from several different kits with a unifying color scheme of my own choice. With each of the different styles I get a general idea of where I’m going to put the larger pieces before I begin, but once everything is painted and ready to assemble I pretty much just free flow it and somehow, someway, the parts just end up falling into the right places.

With my “Acid Rain” style pieces I have no set idea as to what colors are going to go where and I pretty much just let gravity do all the work. Those pieces are a breath of fresh air and are actually quite relaxing to make as I tend to be overly meticulous towards my attention to detail and symmetry in my other work. I guess you can say it’s my version of throwing paint at a canvas.

What are some of the challenges and benefits of using existing toy parts?

Well obviously one of the main benefits of using pre-made and pre-sculpted parts is that I do not have to sculpt those designs myself. Although that doesn’t necessarily make it all that easy to blend those parts seamlessly to a platform toy. It’s kind of like sculpting with clay that has already hardened, and it’s pre-shaped. Usually I have to alter every piece in one way or another using tools and exacto knives to make it fit properly on the toy, or on another piece. Also another challenge is securely reinforcing the pieces so they do not fall off or break while being handled or shipped.

What’s next for you? Do you have any shows coming up this year?

Right now I’m trying to catch up on my commissions list in order to take care of some incredibly patient collectors. I’ve also had some success at a few shows this year including the Clutter Custom Toy Show at Clutter Gallery, and the Clutter Magazine Booth at NYCC 2014. I’ll be releasing Gunny Series 3 at the Spankystokes Booth at Designer Con 2014, and I’m really excited to be a part of the the Designer Toy Awards x Kidrobot Custom 20” Dunny show at Clutter Gallery in January 2015. Definitely looking to take on some new commissions and additional shows in the near future, and I’m really excited about further expanding, modifying, and perfecting my craft. There may be some production toys in the near future as well.

I’m incredibly grateful for all of my collectors and fans out there and I want to give a big thanks to all of you. You are the ones that make losing way too much sleep working until the wee hours of the morning worth it. And big ups to all the customizers out there making a living off of this madness who are rockin it and doing their thing. You are all a huge inspiration to me. I love everything about the designer toy scene and plan to be a part of it for a long as I can be. Thank you for giving me this opportunity to allow the world to get to know me a bit better. It truly is appreciated.