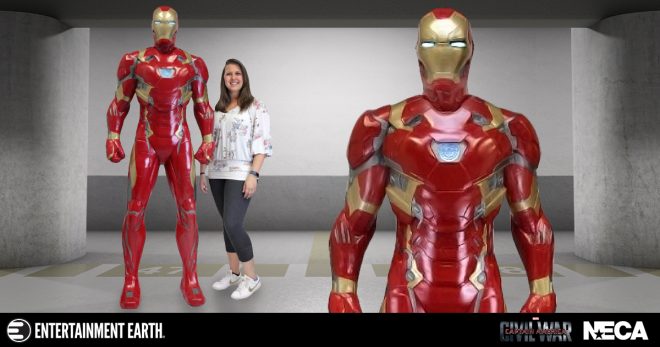 They say heroes walk among us, but they usually mean heroes like firefighters and police officers and military who put their lives on the line for the good of those who need help. They don’t usually refer to superheroes. But what if you could stand next to a superhero? What if you could be alongside the likes of a bonafide Avenger? Maybe someone like Tony Stark…Or rather his persona, Iron Man. Now it’s possible!

The Captain America: Civil War Iron Man Life-Size Foam Statue makes dreams a reality. Sporting the armor straight from the third Captain America flick in the series, Iron Man stands 6 feet 5-inches tall and is made of foam rubber and latex. The statue is hand painted and full of on-screen quality realism. It’s enough to convince even the most expert of agents of S.H.I.E.L.D. but probably not JARVIS.

While your friends brag about their latest action figure purchase or Funko Pop addition to their collection, you’ll be the friend who has Iron Man standing in their living room or office. Assemble your crew, buy the Iron Man statue, and be the talk of the town!