This Convention Exclusive Is Destined to Save the Kingdom of Hyrule 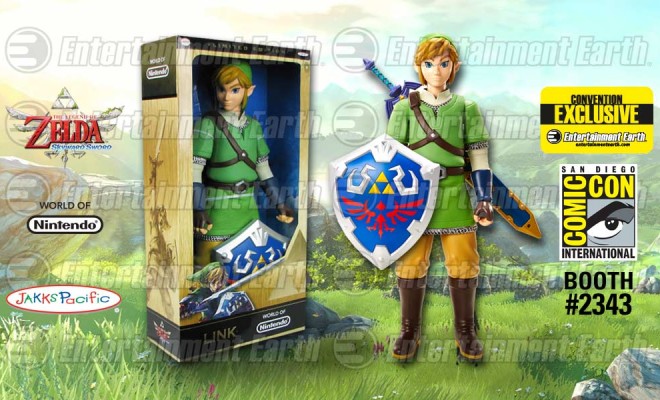 You may have saved Hyrule, but have you done it with the best possible weapons and armor? Now you can with this limited edition The Legend of Zelda: Skyward Sword Link Variant 20-Inch Premium Action Figure – Convention Exclusive!

This variant action figure stands above the rest with several awesome features, including metallic silver chainmail you won’t find on any other Link figures at this scale and rich gold trim around his scabbard.

Featuring his design from the Nintendo Wii game The Legend of Zelda: Skyward Sword, Link sports his traditional green tunic over beige pants and brown boots.

He carries his Hylian Shield, which displays a golden Triforce and a special gold and silver paint job not available anywhere else. His Master Sword, situated on his back, is painted to match.

Link stands 20-inches tall and comes packaged in a golden box, similar to the golden Zelda cartridges for the NES and Nintendo 64.

NOTE: This item will first be sold at San Diego Comic-Con 2015 at the Entertainment Earth booth #2343. If supplies remain after the show, your order will be filled and shipped to you then, at the end of July 2015.

You don’t want to take on Ganon with anyone but this destined Hylian hero, so order yours today! The Skyward Sword Link Variant 20-Inch Premium Action Figure is available exclusively at Entertainment Earth in July 2015.