We Must Be Dreaming – James Bond Goldfinger Action Figures!

According to Auric Goldfinger, “man has achieved miracles in every field of human endeavor, except crime.” Be that as it may, we know the men and women of Big Chief Studios have achieved a miracle in deluxe, collectible action figures with this trio of key characters from the third, and arguably the most acclaimed, James Bond film, Goldfinger (1964).

Based on Ian Fleming’s 1959 novel (the seventh in his Bond series), Goldfinger helped set the template for all later Bond movies – the pre-credits action sequence, the high-tech spy gadgets, the globe-spanning adventure – and enjoyed popular and critical success, even becoming the first Bond movie to win an Academy Award (Best Sound Editing). The late Roger Ebert wrote, on the movie’s 30th anniversary, “of all the Bonds, Goldfinger is the best… If it is not a great film, it is great entertainment, and contains all the elements of the Bond formula that would work again and again.”

Each of these 1:6 scale figures, all produced with an eye to meticulous on-screen accuracy, are dressed in hand-tailored fabric costumes and come with ten pairs of interchangeable hands and various, character-appropriate props. Each can be displayed in front of a printed backdrop with a display stand that features a light-up name plaque.

Want some specifics? Then let’s have a little fun with Mr. Goldfinger and friends, shall we?

Has any other movie villain inspired as memorable a musical sting? (Admit it: You’re hearing Shirley Bassey and those trumpets in your head right now!) Here’s Auric Goldfinger himself, “the man with the Midas touch,” as portrayed by Gert Forbe (although another actor, Michael Collins, dubbed the German actor’s lines). He cuts a sharp albeit sinister and, let’s face it, slightly pudgy figure in his golden-vested outfit. This Bond baddie comes with six signature props, including his golden .38 revolver and a bar of recovered German gold bullion. He makes a marvelous action figure, but, oh, pretty collectors, beware: “He only loves gold!” (Sing it, Shirley!) 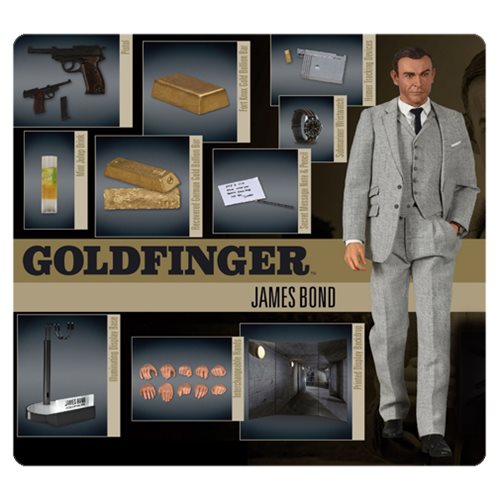 Speaking of memorable movie music, our hero has one of cinema’s most instantly recognizable themes, and you won’t be able to stop yourself from humming it while you pose Sean Connery’s dapper 007 on your shelf. Dressed (and licensed) to kill in his dashing three-piece suit, Bond wears a pair of shoes with a secret, sliding heel compartment. The large and small homing devices from Q-Branch are included, but are, alas, non-functional – so if you misplace this figure, you’re on your own. Bond also boasts his celebrated Rolex Submariner wristwatch, his iconic Walther PPK pistol, and five other props. This figure perfectly captures Connery’s sophisticated special agent – the first and, for many Bond buffs, definitive on-screen interpretation of the character.

Despite appearing only in this film (excluding appearances in video games and the short-lived animated James Bond Jr. series) and speaking no lines of dialogue in it (unless you count “Aha!”), Oddjob, as played by Harold Sakata – a weightlifting silver medalist at the 1948 Summer Olympics – is the Bond series’ most famous henchman. He’s the man, after all, who painted Jill Masterson (played by Shirley Eaton) in gold paint from head to heel (contrary to urban legend, Eaton survived her body paint, arguably becoming cinema’s sexiest “corpse” in the process). And he’s a vicious shot with his steel-rimmed bowler hat, one of the six props this figure comes with. (How could it not be?) Another is a golf ball; we suggest you not crush it.

We know Bond enthusiasts could talk all day about these legendary characters, but we don’t expect you talk… we expect you to buy! Pre-order one, two, or all three of these Goldfinger action figures today!