Do You Know the Many Faces of Jean Grey / Phoenix? 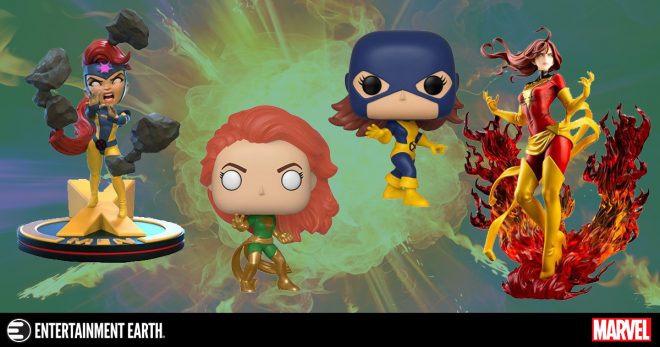 Jean Grey has had many identities and we love her for it. How were we blessed with all of these outfit changes? She’s been through a lot, she’s been MANY forms, and we’re here to celebrate that with this list of Jean Grey/Phoenix collectibles.

So, go ahead and peruse. Take a look around and see which version you’d like for your collection (we suggest all versions, FYI.)

Get All Telekinetic with This Jean Grey Q-Fig!

In this Q-Fig Diorama, Jean Grey uses her telekinetic powers and is throwing rocks at…whoever you’d like it to be! Here she is in full action AKA beast mode.

Complete your Q-Fig X-Men collection with this Jean Grey Q-Fig!

I’m not playing favorites, but I do love Funko Pop!’s style and Marvel Girl is a definite winner for them.

Can you believe Marvel is 80? I don’t. But I do believe in Marvel Girl and this perfect little Funko Pop!

Ooh! Ooh! Look! Look! Glow in the dark Phoenix!! (side note: I’m very much an adult.). Funko Pop! is bringing the Phoenix Force with this one!

Is it just me or does it look like the wind is blowing her hair, in her hold and green suit, a la Beyoncé-style? It might just be me, BUT…

This is definitely one for the collection. And…it’s an Entertainment Earth Exclusive!

Entertainment Earth Exclusive! A mutant with immense cosmic powers is ready to join your X-Men collection. Before turning into the brutal Dark Phoenix, the Phoenix Force came to Jean Grey’s aid, emerging in a green-and-gold suit as you see here. Positively radiating power, this exclusive Pop! Vinyl literally glows in the dark! The X-Men Phoenix Green Glow-in-the-Dark Pop! Vinyl Figure – Entertainment Earth Exclusive measures approximately 3 3/4-inches tall and comes packaged in a window display box. You don’t need to be an Omega-level mutant with telepathic and telekinetic powers to bring this fantastic figure home. Simply place your order now!

We Are Fired up about Bishoujo’s Dark Phoenix Rebirth Statue!

The resurrection is here! I’m talking about Dark Phoenix, of course. This is Jean Grey in her rebirth and she is surrounded by flames, looking FIERCE and powerful, and rising like…well, like a Phoenix. Clever.

This statue from the Kotobukiya Bishoujo series is all sorts of beautiful. The crisp detail and stunning artwork represent this superhero in her highest form. From the look and feel of the wind, to her boots, suit, gloves, and the powerful flames, you won’t be able to keep your eyes off of this expertly-crafted statue

Add this to your X-man collection, or just find a place for it on the mantle, because this is a definite must-have. Order your X-Men Dark Phoenix Rebirth Bishoujo 1:7 Scale Statue today!

Dark Phoenix returns to Kotobukiya’s Bishoujo series as a 1:7 scale statue and is sculpted based on a new illustration by Shunya Yamashita. The sharp look in the Phoenix Force’s eye and tightly closed lips, to the power emanating from her fingertips to her facial expression, this product perfectly showcases Dark Phoenix’s character in one statue. The Phoenix Force effect shown in this statue resembles that of a phoenix itself. Enjoy this beautiful yet also dark representation of Dark Phoenix. Get your hands on this all-new Bishoujo to truly enjoy every detail.

Collectibles
Related ItemsJean GreyMarvelq-figX-Men
← Previous Story You’ll Never Go in the Water Again with This Jaws Diorama Statue!
Next Story → How to Collect Transformers Toys: The Ins and Outs of Buying the Right Bots