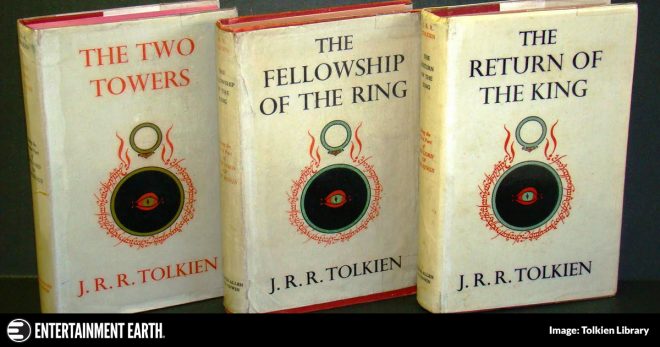 Would popular culture be different if J.R.R. Tolkien had never written about Middle-earth?

Of course, it would be – and not for the better! Tolkien’s books have enriched popular literature, music, movies, and more in ways that put even the dragon Smaug’s great cache of gold to shame. So let’s count down the 9 biggest impacts the Middle-earth books have had and continue to have on popular culture.

(Why did we choose 9? If you have to ask, you’re probably reading the wrong blog!)

9) Fun Name for an Anthropological Discovery

Had Professor Tolkien never written anything concerning hobbits, anthropologists wouldn’t have had a convenient shorthand to use when describing Homo floresiensis to the public. Discovered in 2003, these ancient competitors of Homo sapiens lived in Indonesia until about 50,000 years ago and stood about 3 1/2-feet (1.1 meters) tall. Naturally, they were nicknamed “hobbits,” and the name stuck.

The late-night comedy star has been bringing his love of Tolkien’s books to our TV screens on a regular basis. He’s grilled such Lord of the Rings movie stars as Viggo Mortensen and Ian McKellen over how well they know what Tolkien’s books say about their characters. And he’s proved his Tolkien bona fide with detailed, on-air discussions of Middle-earth lore – for example, the time he schooled scientists about why they were wrong to name a new species of spider after Gollum.

The Sword of Shannara (1977) became a bestseller in large part because its author wrote it to be just as exciting and enchanting as J.R.R. Tolkien’s books, but without Middle-earth’s sometimes daunting historic and linguistic backstory. Since that time, however, Shannara has become its own complex, compelling fantasy setting, boasting eight interconnected series of books and an MTV adaptation.

We don’t know when Martin will wrap up A Song of Ice and Fire, the epic fantasy series on which HBO’s Game of Thrones is based, but the author claims that whenever he does, the series’ conclusion will bear Tolkien’s stamp. Martin has publicly said he “reveres” The Lord of the Rings, and that he admires the “bittersweet” finish Tolkien provided in The Return of the King. Martin believes, like Tolkien, that when it comes to conclusions, “you need to have some hope.”

The antiwar and environmentally friendly sentiments found in Tolkien books – as well as, frankly, the idea that the Shire’s “pipeweed” was more like marijuana than tobacco – helped The Hobbit and The Lord of the Rings win avid fans among the youth movements of the 1960s. The slogans “Frodo Lives!” and “Gandalf for President” could be found on subway walls. Middle-earth became, as author Jane Ciabattari put it, “a literary escape hatch for a generation.”

4) “The Ballad of Bilbo Baggins”

In 1967, Leonard Nimoy took off his Spock ears long enough to croon this totally far-out tribute to the original Tolkien hobbit. Composed by Charles Randolph Grean (you’ve heard more of his work than you know – he arranged Nat King Cole’s recording of “The Christmas Song”), this bouncy ballad is one of the more unusual (dare we say, illogical?) legacies of 1960’s U.S. Tolkien mania.

You know any band that titles a song “Misty Mountain Hop” (1971) must have members who are Middle-earth fans! But it’s in “Ramble On” (1969) and “The Battle of Evermore” (1971) that Jimmy Page and Robert Plant really indulge their love of Tolkien’s lore, with references to Gollum, Mordor, and ringwraiths. Plant was such a Tolkien fan, in fact, he even named his dog Strider!

For more examples of Middle-earth’s influence on rock music, check out “Rivendell” by Rush or Black Sabbath’s “The Wizard.”

Although D&D’s co-creator Gary Gygax was more a fan of pulp sword-and-sorcery fiction like Robert Howard’s Conan series, he told TheOneRing.net, “Just about all the [original] players [in 1974] were huge [Tolkien] fans, and so they insisted that I put as much Tolkien-influenced material into the game as possible… [There] were Balrogs, Ents, and Hobbits in it.” When Tolkien’s estate threatened TSR with a lawsuit, those specific names disappeared, but the Middle-earth analogs they named remained.

Whether you think they faithfully adapt the letter and spirit of Tolkien’s texts or bury them under extraneous subplots and special effects, you can’t deny the fact that director Peter Jackson’s two film trilogies (The Lord of the Rings, 2001-03; The Hobbit, 2012-14) increased popular culture’s awareness of the books exponentially.

Christopher Tolkien claims the blockbuster movies “eviscerated” his father’s books – but they inspired countless people to pick up those books for the first time and sent long-time fans scrambling back to the source to check (and argue) the filmmakers’ choices. Love them or loathe them, Jackson’s films helped bring (or bring back) Tolkien books to readers’ bookshelves and into readers’ hearts around the world.

Plus, the films gave the Internet that great “One does not simply…” meme!

What do you think are the biggest ways J.R.R. Tolkien’s books have influenced popular culture? Let us know in the comments below!