Since 1972, the Saturn Awards has been the official award ceremony of The Academy of Science Fiction, Fantasy and Horror Films, recognizing quality filmmaking and television excellence. Past winners of Saturn Awards have included the legendary likes of Steven Spielberg, Guillermo del Toro, and the Godfather of Marvel himself, Stan Lee.

The 42nd Annual Awards took place last night in Burbank, California, and members of the Entertainment Earth staff attended the event to dress up the chairs in the venue with Entertainment Earth Supergirl, Batman, and Bizarro Chair Capes. Audience members were able to take these Chair Capes home at the end of the night after host John Barrowman (Doctor Who, Torchwood, Arrow) rocked one as a real superhero cape onstage.

The red carpet before the show was a busy stream of dedicated cosplayers and fan-favorite actors like Jensen Ackles and Jared Padalecki, as well as William Shatner and Nichelle Nichols from Star Trek: The Original Series, who celebrated the 50th anniversary of the show.

Several special awards were handed out at the event. This year’s Lifetime Achievement Award went to Nichelle Nichols, best known as Communications Officer Lt. Uhura in Star Trek. Nichols was also recognized for her 50+ years of contributions to genre entertainment and her vocal support of NASA and other scientific organizations.

Congratulations to all the winners of this years Saturn Awards! Entertainment Earth was honored to be able to contribute our own superhero touch to the night. 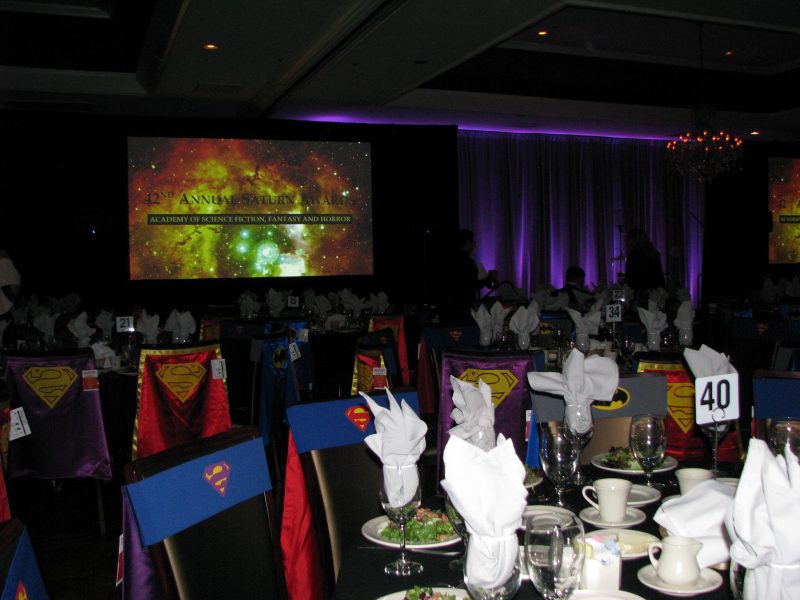 Entertainment
Related ItemsSaturn Awards
← Previous Story Finally! You can get All The Masters of the Universe Mini-Comics in One Volume
Next Story → New Rogue One Photos Show Stormtrooper Beach Bash