Raise a Glass to This Fallout Glassware

Life in the Wasteland is tough. When you’re not scavenging for supplies, you’re busy avoiding the troublesome Tunnel Snakes. Sometimes all you want to do is relax and kick back with a cold brew. Now you can, thanks to these spiffy Fallout Vault Boy Drinking Glasses.

The Fallout Vault Boy Shot Glass features the popular Vault Boy looking as chipper as ever. As an added bonus, he also glows in the dark! This must have for Fallout fans holds up to 1 ounce of liquid.

The Fallout Vault Boy Bomb Pint Glass features the Fallout logo on one side and the smiling Vault Boy on the other. In his hands he holds a bomb and some TNT. He’s ready to work on his demolition skills! This glass holds up to 16 ounces of liquid.

The Fallout Vault Boy Boxing Pint Glass showcases the familiar Vault Boy on one side and the popular video game’s logo on the other. Vault Boy looks a little worse for wear, as his shirt is off and his fists are raised. The bruise on his cheek indicated he was recently in a boxing match. This collector’s item holds up to 16 ounces of liquid.

All three of these glasses will be available in August 2016, so place your pre-orders now! 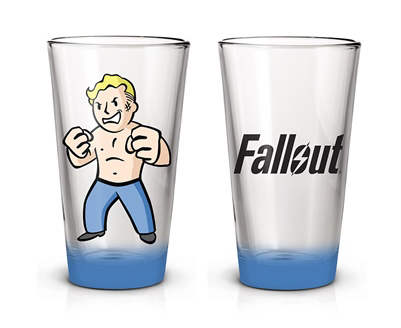