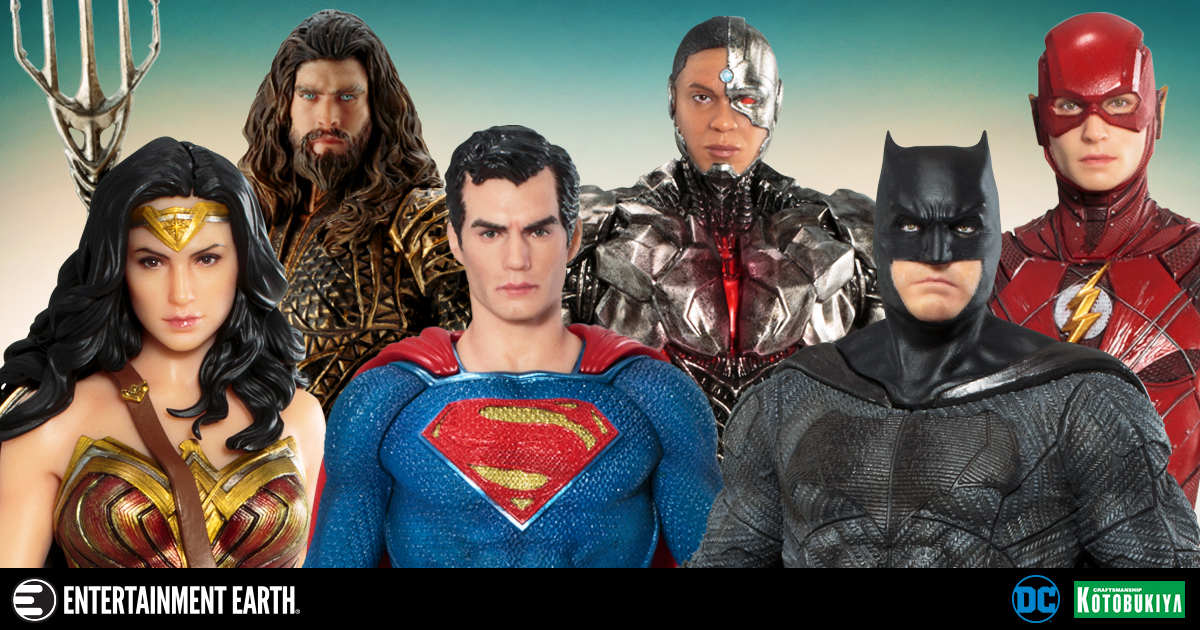 Have you been searching for superheroes to assemble your very own Justice League? Well, there’s no need to go to the four corners of the earth or the depths of the sea. You can pre-order all six heroic members with these new ArtFX+ statues from the Justice League movie.

All six statues will be released in December 2017. Each statue features magnets in their feet to display on an included base without any worry of being knocked over. At a 1:10 scale each member is sculpted with great detail to resemble the characters and actors for each member of the upcoming blockbuster.

Starting with Batman, we can see a really strong prominent stance of power. His suit has very detailed texture showing off the separate panels and bat symbol from the movie. The cowl is a very smooth matte black in comparison. What is impressive is the face sculpt. In a close up you might think you are actually looking at Ben Affleck under that mask with his stern demeanor and furrowed brow. Whether displayed alone or with the rest of the group, this is an impressive statue.

While the caped crusader is my favorite of the bunch, the Wonder Woman statue has a real sense of life to it. She’s holding her staff in one hand and her sword in the other. Her stance has one foot slightly in front of the other as if she is ready to pounce at a moment’s notice. The outfit is sculpted to show every detail and painted with great gold accents that almost shimmer at first glance. Her flowing hair is probably my favorite feature. The hair frames her face perfectly and makes me want to stare into those magnetizing eyes for hours. It doesn’t hurt that she truly is the spitting image of Gal Gadot too.

When looking at the Flash statue, get the impression of innocence, a trait that has been shown in the trailers thus far. His facial expression is that of a determined newcomer and his stance looks like he is ready to speed into battle. There are great sculpted details showing each specific panel of his suit. The different tones of reds are brought to life with the gold accents and make it seem he could run passed in the blink of an eye.

Even more impressive is the truly detailed Cyborg. There is a definite air of confidence in his stance with both arms bent at his elbows and fists clenched. All of the intricacies can be seen in his exoskeleton suit. The resemblance to actor, Ray Fisher, is uncanny considering you can only see half of his face. What really stands out is the paint job on this statue, though. Just below his chest plate, there is a vibrant red that is almost glowing. From far away you might almost swear he was. He is striking and well worth being added to any Cyborg or Justice League fan’s collection. 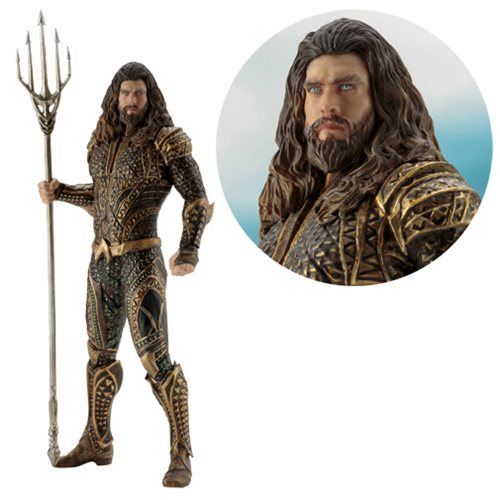 For the rock star of the group, we have Aquaman. I never really considered Aquaman a rock star until Jason Momoa was cast to play him and this figure is one of the best I’ve seen to come out yet. He’s standing holding his trident covered from the neck down in his armor. It is sculpted to show each rivet specifically and painted to bring out all of those details. Looking directly into his eyes there is a sense that you are looking right into the depths of the ocean and all its fury it can create. 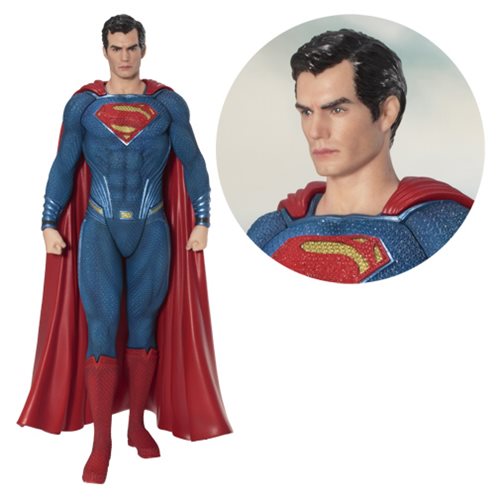 Finally, we have Superman. He has a very serious look with clenched fists that could be a look into what we can expect from the upcoming film. Could this mean there is a return of our beloved Superhero? Let’s hope so because this version of Superman looks like a character I can really get behind. There is a brooding scowl on his face that makes me want to find out more. There are some great sculpted details throughout as well. His suit has great texture and the vibrant colors that will make any fan want him on their shelf.

All six of these statues are really amazing renditions of the Justice League movie characters. They all bring the essence of what each actor brings to the table and the detailing put into making them really makes them impressive collectibles. While each statue looks great on their own, no enemy would stand a chance by assembling all six into your very own heroic Justice League.