Get ready to assemble the most elite team of crime fighters with these Entertainment Earth Justice League Pop Vinyl Figures. This superhero team is the best of the best including Superman, Batman, Wonder Woman, Aquaman, the Flash, Green Lantern, and Cyborg. They are super cool silhouetted versions of the original team that feature glow in the dark elements to really make them pop in your collection.

This Superman Pop! is a rather simple dark shape that looks like a man with a cape on his back. It is the glow in the dark features of his chest insignia and glowing eyes that remind me of his laser vision that will cut down any criminal in his path.

Batman has always had a very daunting outline, known by criminals everywhere. There’s no mistaking him with his pointed bat ears, cape and sharp arm plates. To top it off this figure showcases glowing eyes and a bat insignia on his chest to scare any bad guys in the shadows.

Being the only girl in the group, Wonder Woman is easy to spot by her form with her long hair and holding her trusty lasso of truth. Her eyes, chest plate and signature headband all glow in the dark alerting any foe to think twice before committing a crime.

The depths of the sea can’t hide from this Aquaman. His glow in the dark scales, eyes, and signature A belt buckle make him easy to spot by sea or land.

If you blink you may miss this Flash Pop! figure. He has great details of thunderbolts on his ears and legs, but it is his glowing eyes, belt, arm bands and chest insignia that make him easy to spot no matter where he pops up.

Standing strong and ready to uphold justice across the universe is this Green Lantern figure. His face mask and chest insignia glow in the dark to show off which character this is, but what it is super cool is a glowing ring on his right hand. It is a great detail to bring this figure to a whole new level. 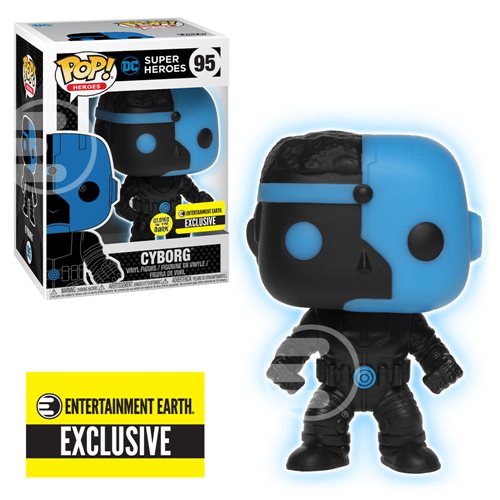 Finally, one of the coolest figures of the bunch is Cyborg. Not only is his stance slightly different from the rest with his fists turned outward, but half of his face is molded with glow in the dark material. This along with a glowing belt buckle, right eye and strip on his head bring this mechanical superhero to life no matter how dark it is.

All seven of these silhouetted superheroes are sold separately, but you won’t want to miss out on adding the entire group to your collection. They are exclusively available at Entertainment Earth so be sure to order yours today!