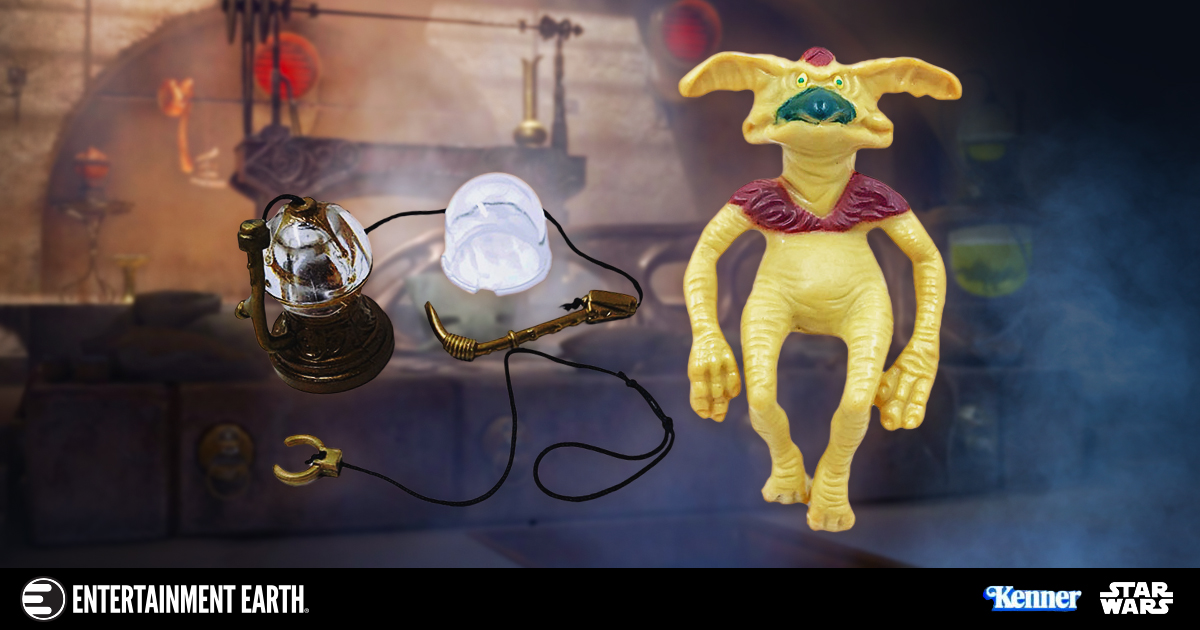 Like most, when Star Wars: Return of the Jedi was brand new, I couldn’t get enough of Jabba the Hutt and his crazy courtiers. Gamorrean guards! Bib Fortuna! The Max Rebo band playing “Lapti Nek” (my favorite cue from the original soundtrack LP)! The raging Rancor in the dungeon!

It all felt like the original Star Wars‘ cantina scene times at least ten. To this day, I still feel a little let down when Jabba’s sail barge blows up and the movie moves on.

That’s one reason I’m excited about these two vintage Kenner accessories from the 1983 Jabba the Hutt Action Playset.

Authentic Vintage Elements from One of Kenner’s Most Popular Playsets

The plastic replica of the repulsive crime lord reclining on his dais originally sold, on average, for $12.99 (that’s $32.47 in 2018 dollars) and still ranks among “the most popular of all Kenner’s many Star Wars playsets,” according to expert collector Mark Bellomo’s Ultimate Guide to Vintage Star Wars Action Figures.

It’s not hard to see why. Kenner produced an extremely screen-accurate replica of the vile gangster, with moving head, arms, and tail. But the playset also paid close attention to Jabba’s environment. These two playset elements, from authentic Kenner 1983 stock and sealed in factory plastic bags, prove it. 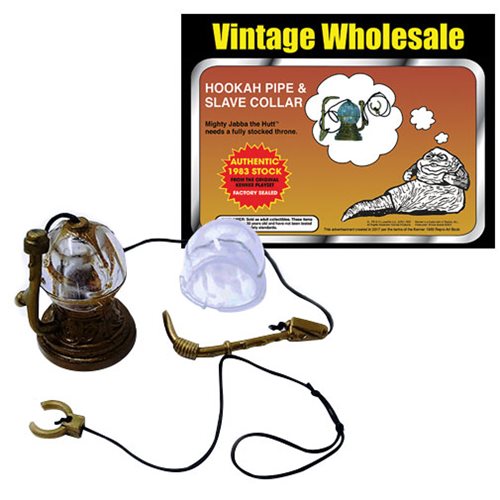 I’d bet not too many kids’ toys ever came with a hookah pipe and slave collar. But the Jabba playset did! Remember how the Hutt casually puffed his water pipe as poor Oola, unwillingly tethered to him, danced? The hookah and slave collar are emblematic of Jabba’s decadent, vice-filled lifestyle.

And then there’s Salacious Crumb. His cascading cackle may be as quintessential a Star Wars sound as the lightsaber’s thrum or the Wilhelm scream. Kenner’s rendition of the Kowakian monkey-lizard doesn’t make a sound and isn’t articulated, but fully captures all the ugliness of Jabba’s number one hanger-on.

Don’t Be Disappointed When Limited Quantities Run Out

Chances to buy vintage Kenner Star Wars toys in new condition are very rare and usually pricey. But these pieces from the original production of the 1983 Kenner Jabba playset won’t cost you a bounty hunter’s fortune. If you have a playset that’s lost some pieces over the years, are getting ready to furnish your brand-new Jabba Sail Barge, or simply want some bona fide pieces of Star Wars toy history, this offer represents a fantastic and uncommon opportunity.

But quantities are limited. When they’re gone, they’re gone, and this offer will end all too soon… just like the Tatooine action in Return of the Jedi.