Kidrobot has long been the purveyor of all things pop art and pop culture, and this fall they’re unveiling a slew of new goodies.

First up is the Kidrobot Bomb Skateboard Deck, designed by in-house designer Johnny Draco this graphically explosive deck is ready to rip on the nearest street corner or add a dynamic KA-POW! to your wall. The Bomb Deck is limited to a mere 300 pieces worldwide, so be sure to pre-order now before it disappears in a blast of smoke!

You’ve collected the 13 beasties and ghoulies that live within the manor—now you can house them all in the Kidrobot Infernal Manor by Brandt Peters Vinyl Figure. This haunted house looms 16-inches tall and is built to display your favorite members of the spooky 13 in various rooms. The Infernal Manor is also limited to 500 pieces, and won’t linger for long!

This King may look like a certain Elder God, but he’s crafted from a very different mold: the King Howie Dunny by Scott Tolleson 8-Inch Vinyl Figure has recreated the greatest of the Odd Ones from his tentacle-y visage to his bunny-like ears. He stands 8-inches tall and is limited to 500 pieces before he sinks back into the dark depths…

You know it’s Halloween when the Deadites start clawing at the door. Good thing you’ve got the Army of Darkness Ash Phunny Plush to help with the defenses. He may look like he’s sitting down on the job – given he’s shaped in a seated position with locked legs – but he can still wield a swath of destruction with that iconic chainsaw hand of his. The Deadites may want you to join them, but take the groovier road and fight back with this fun Phunny plush!

Adult Swim has long been the go-to choice for hysterical cartoons with a decidedly edgier bent, and this Adult Swim Enamel Pin Series Display Tray covers old and new faves alike! These pins arrive in Kidrobot’s signature blind boxes and add that subversive touch of late night flair to any bag, jacket, or hat. The tray contains 20 randomly chosen pins, which run the gamut from Samurai Jack and Squidbillies to Rick & Morty, the Venture Brothers, and more! You’ll never know what wacky characters you’ll get until you open the box… 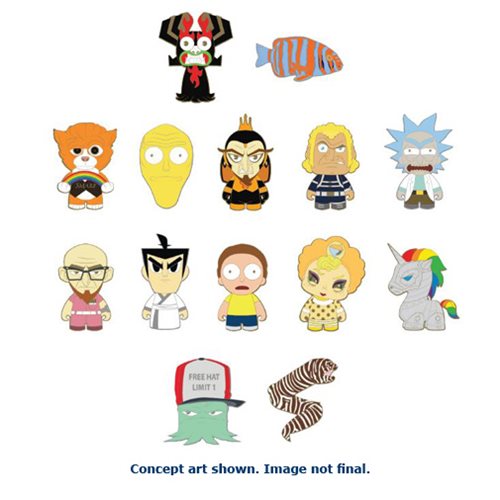 Five Kidrobot goodies, not enough? Check out this video for even more collectibles:

These Kidrobot goodies will be arriving on shelves this fall, so pre-order now!