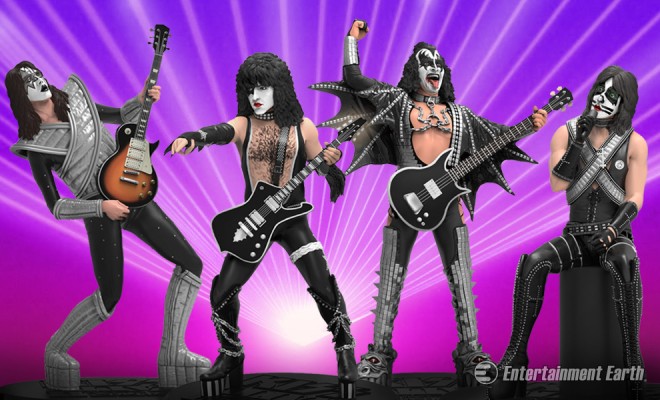 KISS’ founding member and former lead guitarist, Ace Frehley, is ready to get the show started with his guitar in-hand. His stage persona as Space Ace comes from the painted silver stars on his eyes, as seen in the statue.

Peter Criss, better known as Catman, is the co-founder, original drummer, and occasional vocalist for the band. He is featured showing off his vocal skills singing into a mic wearing his cat-like face paint.

Next there’s co-leader and bass guitarist, Gene Simmons, pumped with his fist in the air, wild face paint, and his famous tongue hanging out of his mouth. He is featured wearing his usual demonic attire, hence his nickname The Demon.

And last but not least comes The Starchild, Paul Stanley. The bands rhythm guitarist and co-lead singer is wearing his iconic black star face paint over his right eye with his massive black mane falling just passed his shoulders.

Each statue is a limited edition of 1,000 pieces cast in poly-resin and hand-painted in tremendous detail by a team of highly skilled artists creating a remarkable likeness to the band members. Each Rock Iconz series statue comes hand-numbered with a certificate of authenticity printed on it’s base.

These rockin’ statues are available for pre-order from Entertainment Earth with free shipping. The statues are expected to arrive in April 2016.