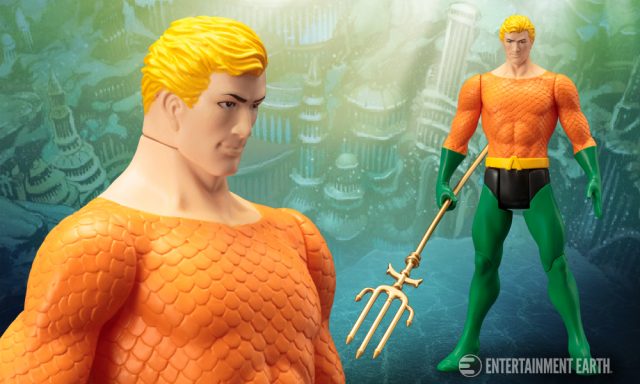 Poor Aquaman always ends up the butt of the joke it seems. Out of all of the members of the Justice League, he’s the one who is considered the one with the worst powers. I don’t know, though. I wouldn’t want to mess with the guy who can create tsunamis and control sharks. Witness him in all his glory with the Aquaman Super Powers Collection ArtFX+ Statue!

Based on vintage action figure sculpts from the Super Powers line enlarged to 1:10 scale, this non-articulated statue brings back Aquaman’s classic look. He’s donned in his signature orange, fish-scaled shirt and green, finned leggings. Around his wait is strapped the yellow belt bearing his symbol, and his green gloved hands hold his powerful trident. His golden hair is coifed and his penetrating gaze pierces your soul.

This figure features magnetic feet for added stability and an alternate arm to display his power action move. Aquaman is made of plastic and measures approximately under 8-inches tall and comes in a closed box.

Place your pre-order now and enjoy this collectible come January 2017!