The Man Without Fear Becomes the Statue Without Fault 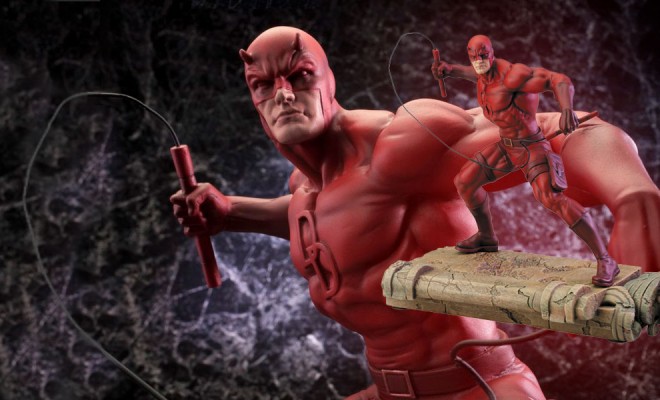 Marvel’s Daredevil premieres on Netflix on Friday and we know the perfect way to get you excited: Kotobukiya’s Daredevil Fine Art Statue is now in stock!

Lawyer by day and superhero by night, Matt Murdock has one goal: make the world a better place. He may be blind but he’s a skilled fighter and fierce against his enemies. This statue expertly shows off his martial prowess and looks awesome in your collection.

It’s sculpted by superstar artist Erick Sosa and features the Man Without Fear decked in his red ninja costume. He wields his signature modified billy club weapon as he stands atop a gargoyle-accented Hell’s Kitchen rooftop base.

Incredible details are incorporated into the statue, from every muscle to the scowl on his face. Not to mention his costume, which features boots, gloves, belts, holsters, and the raised “DD” logo on his chest. It doesn’t get much better than this for Daredevil fans!

The statue stands 10 1/2-inches tall and is limited to 1200 pieces worldwide. It’s currently available with free shipping at Entertainment Earth.

Collectibles Statues Superhero Collectibles Superheroes
Related ItemsDaredevilKotobukiyaMarvelMatt MurdockStatue
← Previous Story To Bust Ghosts, You Have to Ride in Pop! Style
Next Story → Deadpool’s On Set and Ready to Shoot – A Film, That Is