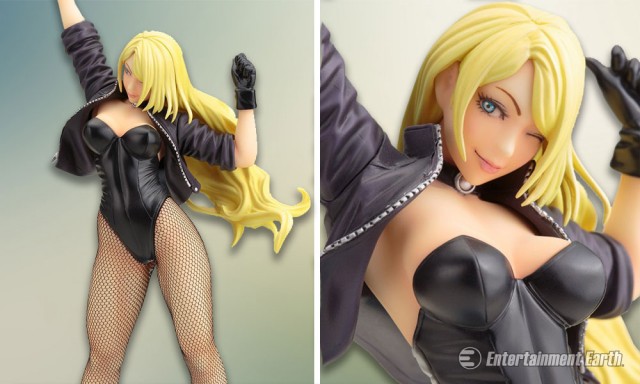 Dinah Lance makes her stunning debut as the DC Comics Black Canary Bishoujo Statue, the newest in the series from Kotobukiya!

Canary has been long awaited to join this series and now that she’s here, it’s clear she was worth the wait.

The statue shows the heroine wearing her traditional and sexy costume consisting of a strapless leotard, leather jacket, fishnet stockings, and boots, all in black.

She stands 9 1/2-inches tall in a playful pose, with her arms raised and blonde hair flowing behind her.

Canary is a popular DC Character – on her own, as part of the Birds of Prey, and thanks to her legendary romance with Green Arrow. She’s sure to be a hit.

Based on the character designs of Shunya Yamashita, get ready to scream with excitement, because this statue is currently available for pre-order at Entertainment Earth with an expected arrival of January 2016.