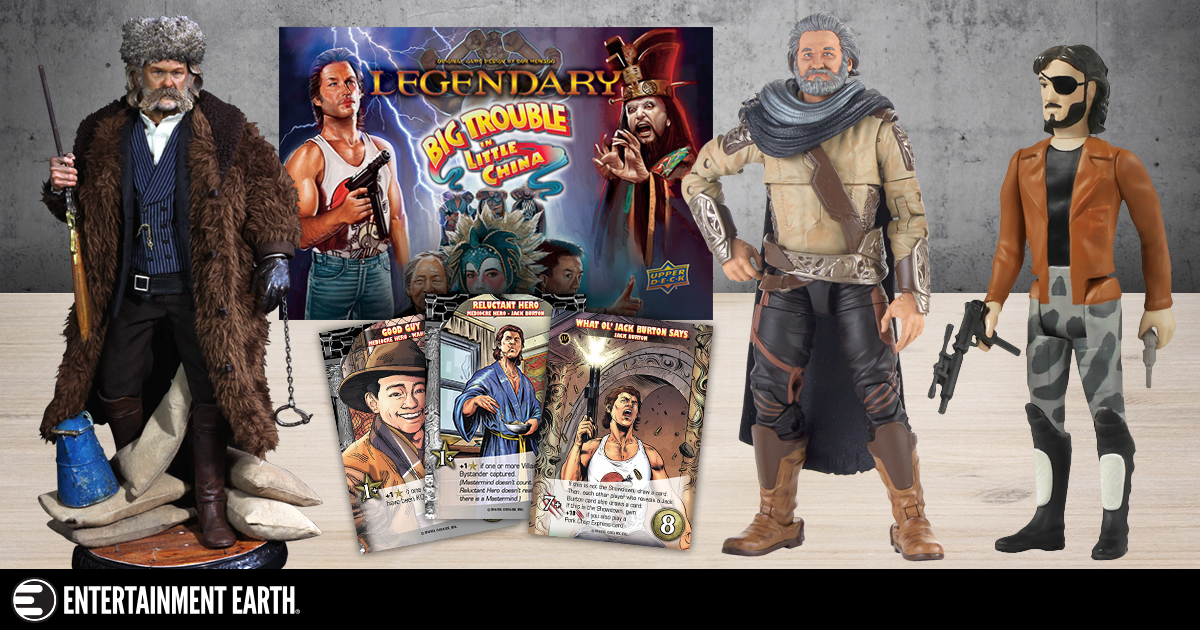 It’s that merry time of year where people of all ages like to reminisce about the years gone by and those happy days of childhood that helped to make us who we are – all thanks to that one hero from our past. That’s right, it’s Kurt Russell’s birthday, and we all have reason to celebrate! Whether you first fell in love with Kurt in John Carpenter’s The Thing or as Wyatt Earp in Tombstone, there is no doubt that you did, indeed, fall in love with him. Entertainment Earth wants to help you celebrate Kurt Russell’s birthday in style with these four amazing collectibles.

There’s little room for debate when it comes to the prowess of Big Trouble in Little China. This movie classic brought many of us to the cult of Kurt for the first time in 1986. You can relive that exciting time in your life with the Legendary Big Trouble in Little China Game. Players can work their way through this cooperative game, trying to defeat the notorious Lo Pan and the Three Storms. You can take on the role of Jack Burton, Gracie Law, Wang Chi, or even the Pork Chop Express to make it to the end!

If games aren’t your thing, perhaps you can get your nostalgia from the Escape from New York Snake with Jacket ReAction Figure. Funko and Super7 bring us this Snake Plissken action figure is made in the style of the old Kenner figures that we grew up with. With the classic five points of articulation, you’ll feel like you’re dealing with a figure from the 70s and 80s. Standing at 3 ¾-inches high, it comes complete with machine gun and pistol, as Snake would never be caught dead without his weapons.

But perhaps you prefer a more seasoned, a riper form of Kurt Russell. For those of that discerning taste, let me show you the Hateful Eight Hang Man John Ruth 1:6 Scale Action Figure. This amazing figure stands at about a foot tall and is complete with over 30 points of articulation, six pairs of interchangeable hands, and detailed cloth and leather clothing. The details and solemn expression on his face will arrest you with the majesty of Kurt Russell.

And if you want to collect Kurt Russell in his absolute most recent role, you’re going to have to take home this Guardians of the Galaxy Vol. 2 Marvel Legends Star Lord and Ego Action Figures 2-Pack. This 2-pack brings home Kurt Russell in his latest incarnation as Star Lord’s long-lost father, Ego. Anyone familiar with the quality of the Marvel Legends line knows that these figures are amazingly detailed collector’s items.

Kurt Russell’s birthday may not be a national holiday yet, but there’s no reason you can’t celebrate like it is. Stop by Entertainment Earth and pick up the greatest Kurt Russell collectibles available today!