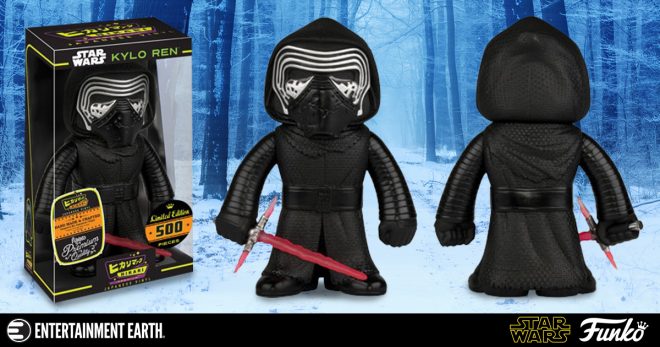 Just a few months before the opening of Star Wars: The Last Jedi, we still have more questions than answers about many of the characters from the new Star Wars trilogy. While we know the origin of Kylo Ren, we aren’t clear on his philosophy. He meddles in the Dark Side, but is a Knight of Ren the same as a Sith Lord? Is it a sub-classification or is it a sister organization? And this Snoke character, does he hold the answers? Dark side or no, Kylo Ren was one of the very bright lights that shined in Star Wars: The Force Awakens.

Answer the call of the Dark Side and collect this Star Wars: TFA Kylo Ren Dark Side Hikari Sofubi Vinyl Figure. The breakout character from The Force Awakens is reimagined in classic Hikari form. This soft vinyl figure is armed and ready to restore order to the galaxy, sporting his controversial red light saber.

One of the best looking Hikari Sofubi figures out there, this is also one of the most limited. There will only be 500 of these made, ever. Each one is sold in an attractive window display box that is hand numbered. If you want to get bragging right by adding this to your collection, you’re going to have to pre-order now from Entertainment Earth!