Review: You’ll Be Calling Super Heroic Shots with This LEGO Build Your Own Adventure Book

In the world of DC Comics, those who wear a Green Lantern’s ring can build anything out of energy and willpower.

If no power rings are winging your way, fear not! LEGO bricks can be the next best thing. And DK Publishing’s LEGO DC Comics Super Heroes Build Your Own Adventure Book proves.

Appropriately enough, a Green Lantern takes center stage: former architect John Stewart, who joined the ring-slinging ranks in 1971 (Green Lantern, Vol. 2 #87). He was also one of the main characters in the animated series Justice League (2001-2004) and Justice League Unlimited (2004-2006). Those series introduced me to the Green Lantern concept, so I’m especially pleased Stewart stars in this book and is the LEGO Minifigure packaged with it.

The story follows Green Lantern on a quest to gather his fellow Justice League members. Lex Luthor and his robot army threaten the League’s base. They must be stopped!

Large, color, detailed photographs of custom builds by super-LEGO builder Rod Gillies illustrate Green Lantern’s trek. It takes him from Wonder Woman’s Themyscira to Superman’s Metropolis – with stops in The Flash’s Central City, Aquaman’s Amnesty Bay and Atlantis, and Smallville along the way.

There’s no detour to Gotham, though LEGO Batman is in on the action, as self-absorbed and self-satirizing as ever – at one point he even critiques the LEGO bricks as “too colorful.”

As with other entries in DK’s LEGO “Build Your Own Adventure” library, this book doesn’t provide step-by-step directions for building anything but the (very cool) 84-piece spaceship and submarine combo vessel that Green Lantern pilots. My 10-year-old daughter, our household’s current LEGO expert, assembled it in 32 minutes.

Instead, the book inspires readers to create not only their own versions of Gillies’ builds but even more so their own vehicles, settings, characters and more, using the bricks in their collections.

And though I mentioned many villains, rest assured our heroes get some neat stuff. In addition to Green Lantern’s ship, check out Aquaman’s underwater throne room and Wonder Woman’s mechanized battle armor! 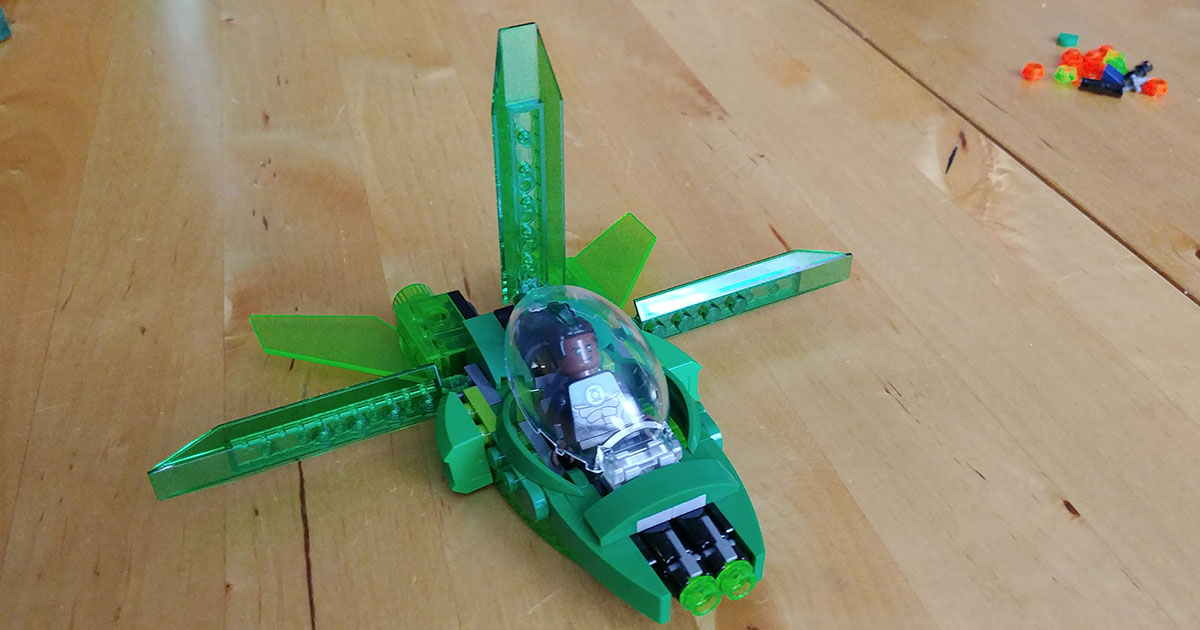 The DC Comics Super Heroes Build Your Own Adventure Book will make a great gift for any young or young-at-heart fans of LEGO and superheroes – or both.

So don’t sit around pining for a power ring. Order your copy of this book and get ready to build whatever constructs you can dream up.

The Justice League is counting on you!

What Justice League-themed LEGO build would you most like to make – or have you already made? Let us know (and, even better, share a picture) in the comments section below!

Collectibles Fun Collectibles
Related ItemsDC ComicsDK BooksLego
← Previous Story Geek Headlines: Fallen Kingdom Trailer, Batmobile Review, and More
Next Story → Porg Nation! Get Your Hands on Some of the Most Popular Porg Goodies out There