Travel through a dimension of sight, sound, and mind with The Twilight Zone Mystic Seer Replica from Bif Bang Pow!.

The hand belongs to Mr. Don S. Carter, male member of a honeymoon team on route across the Ohio countryside to New York City. In one moment, they will be subjected to a gift most humans never receive in a lifetime. For one penny, they will be able to look into the future. The time is now, the place is a little diner in Ridgeview, Ohio, and what this young couple doesn’t realize is that this town happens to lie on the outskirts of The Twilight Zone.

This incredible Twilight Zone Mystic Seer Head Replica is an authentic, functioning replica of the Mystic Seer featured in the well-known The Twilight Zone episode #43, “Nick of Time,” that starred the legendary actor William Shatner. Can’t you see this in your home or office?

“You’re traveling through another dimension, a dimension not only of sight and sound, but of mind. A journey into a wondrous land whose boundaries are that of imagination. That’s the signpost up ahead. Your next stop… the Twilight Zone.” (Spoken by Rod Serling at the beginning of each The Twilight Zone). 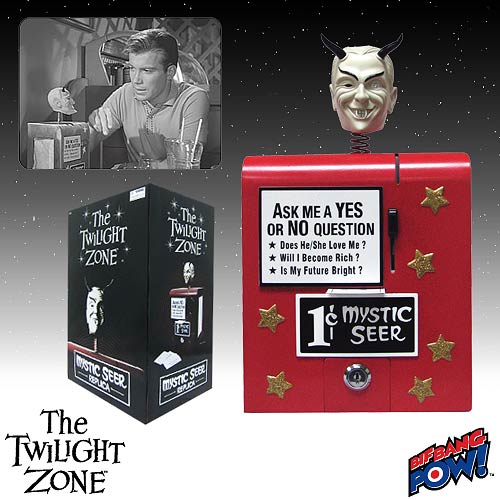