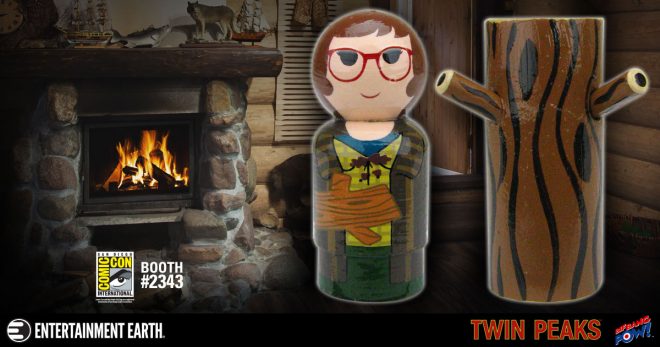 Margaret Lanterman, also known as Log Lady, has some pretty strange relationships, but none stranger than the one she shares with a log. Offering her a conduit to the supernatural realm, the log, gives her glimpses of the future and visions of the past. Bif Bang Pow! now offers a rare chance to collect the fan favorite that made her return in the award-winning television series TWIN PEAKS on SHOWTIME® in a brand-new TWIN PEAKS Log Lady and Log Pin Mate Wooden Figure Set of 2.

Beginning a new series of Pin Mate™ wooden figures, the TWIN PEAKS set comes with the Log Lady (#3) and Log (#4). The Pin Mate line is a retro-fun way for collectors to get their hands on unique, affordable collectibles, each individually numbered within their series. Harkening back to the style of wooden dolls of a simpler time, these 2-inch scale wooden figures feature 360-degree artwork that adds stunning detail.

One of the best things about this incredible duo of quirky characters is just how exclusive it is. These TWIN PEAKS Pin Mate figures are exclusive collectibles that can be found at San Diego Comic-Con on July 20, 2017, in the Entertainment Earth booth (#2343). As an Entertainment Earth Convention Exclusive, each extremely limited set includes the production number marked on a unique holographic sticker. There are only 1,352 sets being made, so if you’re a true TWIN PEAKS fan (or a fan of quirky and awesome collectibles), you’ll have to hurry to claim yours!