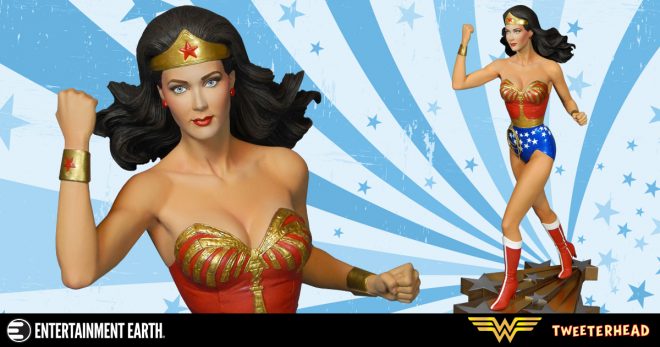 Right now, the entire world may be waiting for Gal Gadot to rock the box office, accompanied by Hans Zimmer and Junkie XL’s kick-butt electric guitar and drum theme, in this summer’s Wonder Woman movie.

But it was singing a different song 40 years ago, when Lynda Carter wore the Amazon Princess’ tiara, steel wristbands, and star-spangled super-suit.

Carter wasn’t the first live-action Wonder Woman (Linda Harrison, the original Planet of the Apes‘ Nova, has that distinction, appearing briefly in a five-minute test film, Who’s Afraid of Diana Prince?) . But Carter is iconic and definitive for the countless viewers who’ve watched Diana Prince spin into her “satin tights,” stop bad guys’ bullets “cold” with her bracelets, and make the world safe for justice, peace, and love in the 1975-79 Wonder Woman TV series. Strength, beauty, brains, humor—Carter played a hero on whom we could easily pin all our hopes.

Now, acclaimed sculptor Trevor Grove pays exquisite tribute to this classic character with a beautiful, detailed maquette for Tweeterhead. On Facebook, he called this project one of his favorites from last year – “a joy to work on” – and it shows!

Wonder Woman stands 13 1/2-inches high as she strides across the “shooting stars” from the series’ opening sequence. Her right arm raised in defiance of all incoming violence, her magic Lasso of Truth coiled on her hip, and assured confidence in her piercing blue eyes, she is more than ready to fight for all that’s right.

Celebrate the world’s most famous female superhero – or the wonderful women in your life – and pre-order your Wonder Woman Lynda Carter Maquette Statue today.

As the old theme song says, “Change their minds, and change the world… Get us out from under, Wonder Woman!”