Bill Miekina: When we create any WWE San Diego Comic-Con item, we want to make a product that’s special and completely unexpected – a little outside anything you’d see in our main product line, but that also makes perfect sense in the context of all our WWE offerings. We also take the broader pop culture picture into account. We want anyone at the Con, whether they’re a casual fan or a hard-core pop culture devotee, to recognize the exclusive item as a “must-have.” And this year’s exclusive really delivers on that front.

BM: Even if you’ve never watched WWE in your life, you’ve probably heard Macho Man Randy Savage himself, or someone imitating him, yelling out, “SNAP INTO A SLIM JIM!!! OOOOH, YEEEAAAHHH!!!!” And it’s the first-ever authentic figure of him in that iconic Slim Jim attire. Everyone can get excited about that!

EE: How involved were the licensors in the creative process?

BM: We worked closely with two licensors, WWE and ConAgra Brands, which is Slim Jim’s parent company because this figure belongs to both of their worlds. The idea of collaborating to create a totally authentic Slim Jim Macho Man excited them both, and they were amazingly supportive.

EE: How did you go about researching the figure?

BM: It took a lot of connecting the dots. WWE provided images of the costume, but because it was used for TV commercials, not an in-ring match, photographs were a bit limited. But reference photos clearly showed details that were hard to make out in available online footage and screen captures from the commercials themselves.

It turns out ConAgra Brands actually has the costume’s original jacket in their office, mounted in a frame. They offered to send it to us for reference, but we ultimately declined. What we needed most was reference was the jacket’s back, but to get at it, we would have had to remove the jacket from the frame, and that would have felt like desecrating a work of art! Luckily, a little more detective work got us the reference we needed, and the jacket remained unscathed.

Overall, we were able to put together a good composite picture from all the available assets and use the different reference sources to “fact check” what we were doing. We did take a couple of creative liberties to maximize the difference between this and any other Macho Man figure we’ve done!

EE: What did your initial concept sketches or renderings look like?

BM: This figure needed very little in the way of concept sketching, as it’s based on recreating a real personality. The ideation process was more about picking what felt like the most iconic version and determining what accessories would create the coolest, most complete “thought.”

EE: Interesting. Could you say some more about the design decisions you made?

EE: What are some other details collectors should look for?

BM: We worked closely with Conagra Brands to make sure the Slim Jim logo on the package and accessories that fit into Macho Man’s hands are based on the 1991 to 1993 logo style, not the updated logo in use today. We wanted to be as authentic as possible for the fans!

EE: How much retooling happened during the sculpting and prototype stages?

BM: There was such clarity of concept on this figure, it changed very little change between the first

prototype and the final product. The Macho Man’s Slim Jim jacket had one minor error on the prototype, but beyond that, the first sample blew us all away when it arrived. And I got excited when the accessories came in – they looked exactly like real Slim Jim boxes, shrunk down to fit in an action figure’s hand! 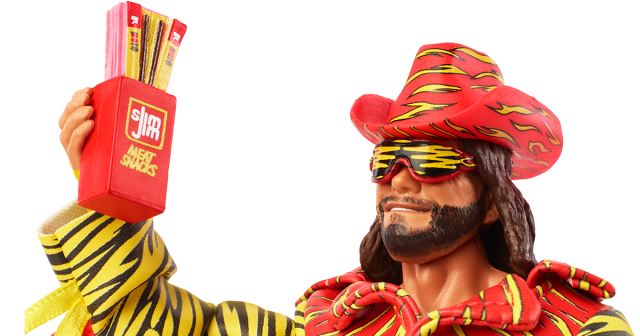 EE: You know packaging counts for a lot with collectors. What can you tell us about this figure’s packaging?

BM: Yeah, packaging’s a key point for any San Diego Comic-Con item. Our packaging team is the best in the business. They went above and beyond to create a package which resembles an actual Slim Jim retail display box, complete with perforated pull tab for fans to “snap into!” As special as the figure is – and as the designer I’m pretty biased – the package accentuates it 1,000% and really tells an awesome story!

EE: What’s next for the Macho Man Slim Jim figure after the convention?

BM: You know, I can’t imagine another WWE Elite figure with such strong appeal across the broad pop culture spectrum than this one. It tells a story collectors will love. And I’m very excited that all the fans who can’t make it to San Diego Comic-Con will be able to get this figure afterward exclusively at Entertainment Earth. As Macho Man would say, “OOOOH, YEEEAAAHHH!!!!”