Celebrate The Mandalorian in Your Collection before It’s Too Late 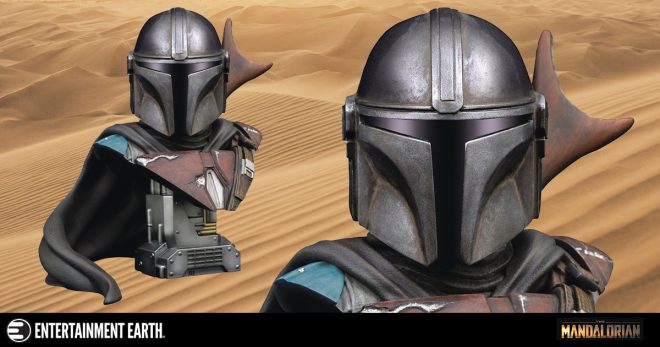 He’s the newest lone wolf in the Star Wars universe, the (as yet) nameless bounty hunter known only to his clients and his targets – oh, and 10 million Disney+ subscribers – as The Mandalorian.

But Diamond Select Toys is turning the tables on “Mando” and making him the asset everyone’s after in this exquisite and impressive half-size Mandalorian bust.

Mando’s a Man Worth Watching

It’s not just Star Wars fans noticing. The Mandalorian is the most-wanted streaming TV series in both the U.S. and the world, according to Parrot Analytics.

And while a certain adorable, pint-sized Force-wielder accounts for a lot of that demand, let’s not undersell the title character’s appeal.

Using only his body and his voice, series star Pedro Pascal completely convinces viewers “Mando” is a man worth watching. Haunted by his traumatic past, hardened by his current “complicated profession,” and handling his unexpected role as a little green guy’s “dad” as best he can, Mando is the most morally complex and compelling protagonist the Galaxy Far, Far Away has given us in a long time.

Not even Omera (Julia Jones) could convince Mando to remove his helmet. The Way of the Mandalore forbids taking it off in front of others. But anyone would want to wear this design as much as possible. It simply looks awesome!

Diamond Select’s 1:2 resin scale bust expertly replicates its sunken, angular cheeks and distinctive T-shaped visor. The approximately 10-inch tall bust also reproduces the tops of Mando’s original pauldrons and chest plate, his flowing black cape, and the curved butt of the disruptor rifle strapped to his back. (“No disintegrations,” my foot!)

Designed by award-winning statues and collectibles artist Joe Allard and sculpted with exacting attention to screen-accurate detail by Gentle Giant Studios, this entry in Diamond Select’s “Star Wars Legends in 3D” series (joining Kylo Ren’s ruined-and-restored mask as it appears in Star Wars: The Rise of Skywalker) will make an unmatched centerpiece for any collection celebrating The Mandalorian.

Best of all, getting your hands on one won’t cost you a camtono of Beskar steel. But it is almost as rare, strictly limited to an edition of only 1,000 pieces.

So tune your tracking fob to Entertainment Earth and pre-order your Star Wars Legends in 3D Mandalorian 1:2 Scale Bust today!