Mario Finds His Goldfish in Another Castle 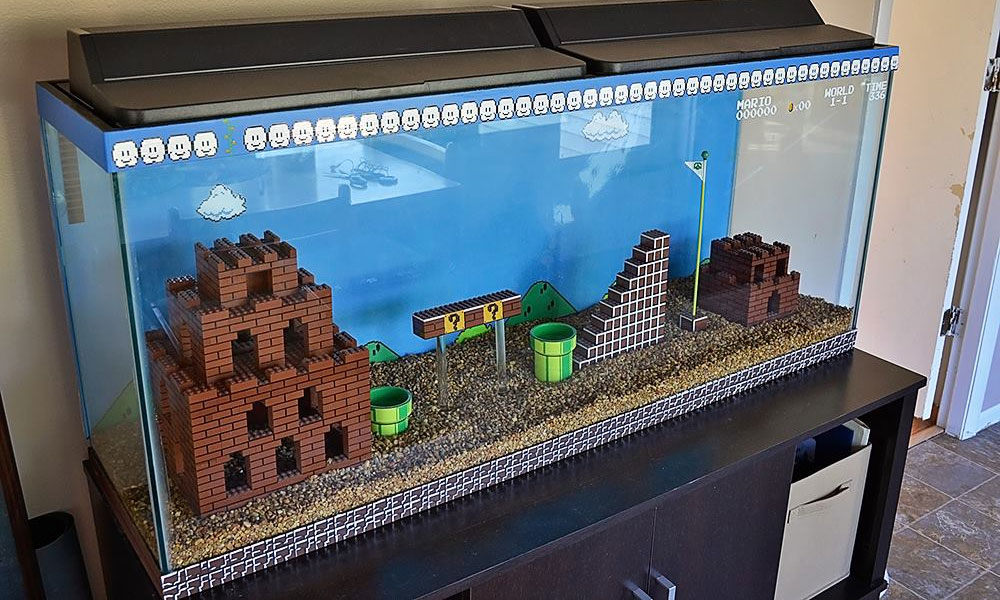 Have you ever seen a fish tank adorned with warp pipes, mystery boxes, flag poles, and grinning clouds atop a bright blue backdrop? If you’ve spent any time on the Internet in the past year, you’ll probably recognize this viral photo. We give major props to 26-year-old gamer-artist Kelsey Kronmiller of The Pixelist for an outstanding concept and stunning execution. After all, you don’t often see DIY taken to this extreme.

In a contemporary twist on all things geek, Kelsey’s 55 gallon fish tank centers around a giant castle based on the prolific Nintendo game, Super Mario Bros.

Though the tank hit the Internet by storm, it actually gained worldwide fame without its curator’s initial knowledge. The unveiling occurred when Kelsey shared a few progress photos of her creation to a private group of crafters on Facebook.

“I was asked to post the tank in its most completed stage, so I posted the picture. [I didn’t] watermark because I figured no one would share an unfinished piece,” says Kelsey.

Well, they did. The next day the photo had made its way to Reddit, where it was posted on the front page of r/Pics, and the rest is history. Appearing on Dorkly, Cheezburger, iFunny, the first page of Imgur (multiple times), and several social media pages, the tank became an incredibly recognizable piece of geek culture.

“I definitely enjoy the attention and praise my work is getting and have absolutely no regrets,” says Kelsey.

Constructed from a combination of Legos, PVC piping, acrylic tubing, vinyl, and a lolli-pop stick, Kelsey’s project brought to fruition every gaming aquarist’s dream. As someone who runs a popular betta fish blog, has a Skyrim-themed license plate, and a cat named Khaleesi, who would be better fit to wield the tools to make fantasy – in its most tangible form – a reality? You can take a gander at Kelsey’s progress photos below.

So who gets to inhabit this fantastical world of koopas, goombas, and plumbers? Kelsey – a responsible fish keeper – is cycling the tank to ensure fish-safe water. She will soon introduce Mario and Luigi to an Electric Blue Jacks Dempsey, a Dinosaur Eel, a freshwater Butterfly Fish, and some Rainbow Fish and Danios.

It’s also interesting to know that while Kelsey’s tank was eventually a smash hit with gamers, initially there was much debate over which game Kelsey would be recreating with her fish tank.

“Considering a Mario tank had already been done, I wanted to do something different. I thought the underwater level in Mario would be awesome, but it didn’t provide enough visually engaging structures for not only myself, but for the fish to be able to hide in.”

Kelsey later decided on the nostalgic World 1-1, which she deemed more recognizable than other Mario universes.

“This tank isn’t 100% complete yet,” she reminds us, adding, “It’s still missing the flag and a few finishing touches to make it perfect.”

So what’s next for this gamer girl?

“I’m always working on a project, so there will be plenty more in the future. In terms of fish tanks, I want to do a small The Legend of Zelda: A Link To The Past theme for my betta fish tank at work. It won’t be as grand and large scale as this tank, but fun nonetheless.” With an impish grin, she adds, “I also have plans to turn the coffee table in my living room into an original Nintendo controller.”

Truth be told? We hate the underwater levels, but this tank is ridiculously cool. Tell us: what do you think? Would you take on a project like this? Sound off in the comments below!

Show us your fan made creations! Email us at [email protected] and we might feature them here!