This Magnificent Martian Manhunter Maquette Will Inspire Your Heroic Spirit 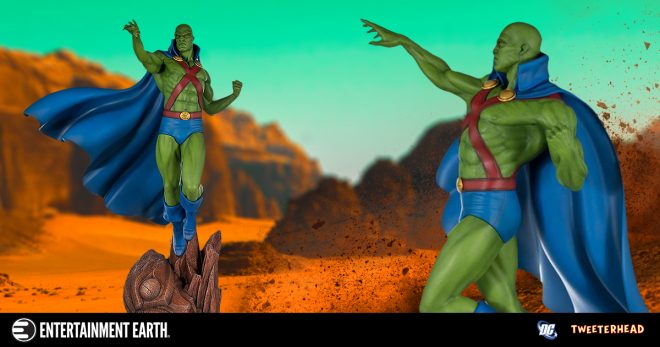 “This is a world where good and evil struggle in all levels of existence. I want to be a force for good… I’ll be one of the good guys.”

Standing proud at 18-inches tall, it presents J’onn hovering above ruins on the rocky Martian surface. He is clad in his most iconic costume: a bright red harness with golden clasps crossing his chest, and cobalt blue trunks and boots matching his long cape, which swirls about his muscular green frame.

J’onn’s eyes glow red with the special vision that allows him to peer across multiple spectra. What does he see? We can only imagine. He pulls his left arm back with a clenched fist, as though ready to fight a powerful threat. But he stretches out his right arm almost hopefully – reaching, perhaps, toward new wonder on the horizon.

The Martian Manhunter wasn’t in last year’s Justice League movie, but he was one of that superheroic team’s founding members in The Brave and the Bold #28 (February/March 1960).

He’d been around five years at that point. A scientist’s teleportation experiment pulled J’onn to Earth in Detective Comics #225 (November 1955). Unable to return home – surprising, since his powers over decades of tales to come eventually rivaled Superman’s – the shape-shifting Martian adopted a human face and name (“John Jones” – no points for originality) and became a police detective.

In Justice League: The Ultimate Guide, Landry Q. Walker catalogs J’onn’s powers (from standards like flight, super-speed, and invulnerability to more exotic attributes like telekinesis, mind control, and “phasing”) and mysterious contradictions: “The Manhunter is a complex individual and no one… truly knows every aspect of his nature.”

But his continued popularity in comics and other media – including the animated Justice League (2001-2004), the latter seasons of Smallville (2007-2011), and currently on Supergirl – proves people respond to this other strange visitor from another planet because he strives to be “one of the good guys.”

And his insatiable appetite for creme-filled chocolate cookies makes him endearing and relatable, too!

Make Sure You Bring the Martian Manhunter Into Your World

Want this big, green good guy in your league of collectible superhero statues? Then you can’t depend on a science experiment gone wrong to bring him to you!

Pre-order your Martian Manhunter Maquette Statue today. Announce to all who admire your collection that you’ve decided to be a force for good, like him!