Are You Ready for 55-60 All New Marvel Comics Titles? 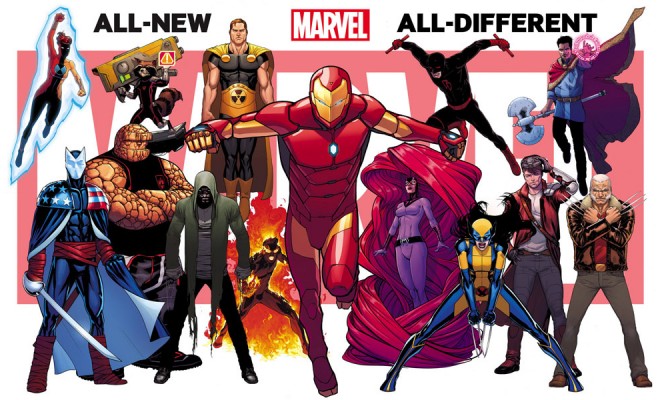 Marvel Comics is in the midst of their universe-shattering Secret Wars event. After all is said and done, 33 titles will be finished, including Captain Marvel, All-New X-Men, Legendary Star-Lord, and more.

However, now we know that come fall, Marvel will be launching 55-60 all new #1s. The first thing we should get out of the way is that this will not be a reboot.

In speaking with USA Today, David Gabriel, Marvel’s senior vice president for sales and marketing, explains: “There are tweaks and nips and tucks here but we’re not re-creating, say, the Marvel Universe as the Ultimate Universe.”

These characters aren’t starting over; rather, the many universes of the Marvel world are colliding to streamline into one universe. Everything that happened before still happened.

Marvel revealed two new images, including the one above, to show some of the characters we’ll be seeing. The second is below:

Based on these posters and what we’ve heard from Marvel creators, some of the big characters we’ll continue to see are a slew of spider heroes (Spider-Woman, Spider-Gwen, both Peter Parker and Miles Morales), Sam Wilson’s Captain America (as well as Old Man Steve Rogers), Ms. Marvel, Lady Thor, Iron Man, and more.

Some characters in these posters also reveal interesting observations and questions.

Daredevil is wearing his Shadowland costume, also similar to the suit we saw him wear in the Netflix series.

While we don’t know what exactly is happening with the Fantastic Four, it looks like the Thing will be joining the Guardians of the Galaxy based on his costume.

His teammate, Johnny Storm, is supposed to be joining the Inhumans who have a huge presence here with Medusa, Karnak (the green hooded figure), and Inferno (a new member). This might be to familiarize fans with them before their movie in 2019.

Another curious sight is Laura Kinney a.k.a. X-23 in Wolverine’s original costume. Her and Old Man Logan are the only mutants to appear here.

There are also characters we’ll be seeing who don’t show up in either of these posters, including a new Hulk. Editor-In-Chief Alex Alonso gave a comment about the new Hulk: “All the same people who yelled about female Thor are going to do the same thing about this Hulk.”

These titles will be hitting this fall. Are you ready?

What do you think of Marvel’s direction? Which characters are you most excited for? Let us know in the comments!