Suit up This Halloween, True Believers and Choose Your Side in Marvel’s War! 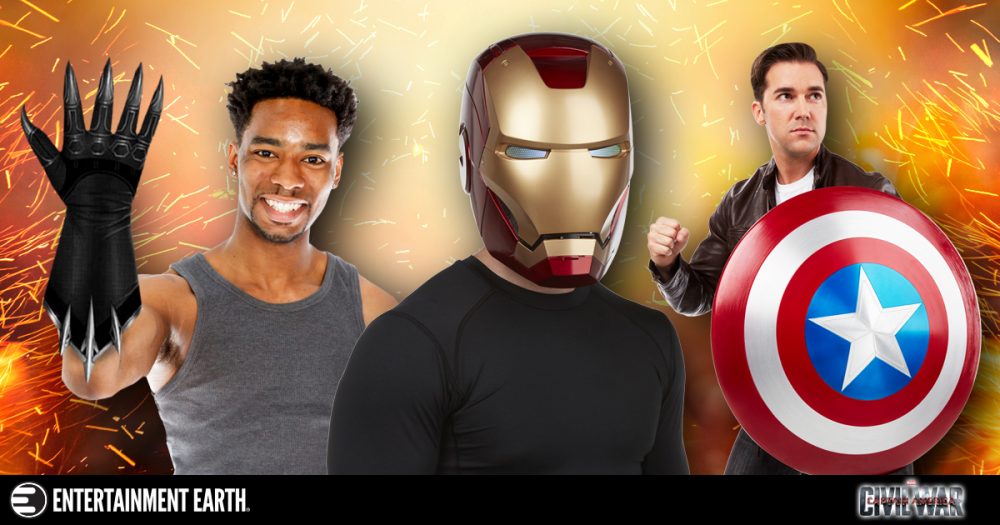 It’s always a shame when friendships sour. But when superhero friendships sour, there’s serious collateral damage. We certainly saw that play out on the big screen this year during Captain America: Civil War, which pitted billionaire playboy philanthropist Tony Stark (aka Iron Man) against America’s golden boy, the first Avenger himself, Steve Rogers (aka Captain America).

This Halloween the conflict continues and it’s time to choose your side. Are you Team Cap, or Team Iron Man?

With two adjustable straps, you can wear it in true Cap style, making it perfect for yearlong cosplay as well as this year’s Halloween costume. It’s also a fine replica to add to your Marvel collection, just in time to celebrate the character’s 75th anniversary!

For those on Tony’s side during the Accords, the Marvel Legends Iron Man Electronic Helmet is a must have. With illuminated eyes, sound effects, and a detachable faceplate, this helmet is a wearable piece of classic Marvel art.

The detailed interior features circuitry flourishes while the exterior finish mimics the advanced alloy construction Stark poured into his superhero exoskeleton. Don Iron Man’s helmet at this year’s Halloween party and display it with pride the rest of the year.

And if you’re carrying a personal vendetta during this Civil War, the Captain America: Black Panther Gloves will certainly help you keep your grip. Featuring King T’Challa’s signature vibranium claws and silver-colored accents, these gloves will add the final touch to your royal hero costume.

Order now and make a superhero-sized statement at this year’s Halloween party!

Collectibles Fun Collectibles Prop Replica
Related ItemsBlack PantherCaptain AmericaCaptain America: Civil WarCostumesHalloweenHalloween CostumesHasbroIron ManMarvelMarvel LegendsProp Replicas
← Previous Story He Is Vengeance, He Is the Night, He Is the Newest Funko Pop!
Next Story → Life Is the Bubbles under the Sea with These New Funko Pop! Vinyls