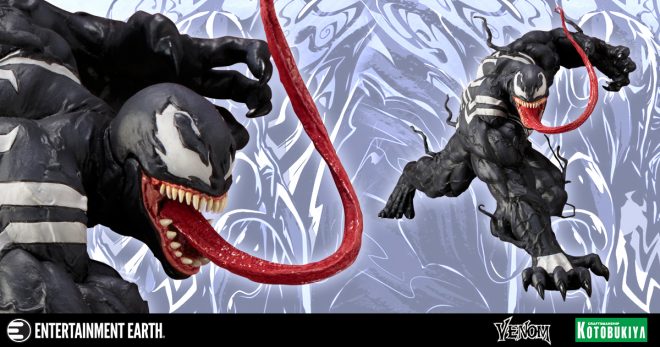 Spider-Man’s world was turned upside down when an alien symbiote came to Earth and bonded with his body. It gave him new abilities and a darker image. It also gave him a brand new lethal attitude that didn’t fit with Peter Parker’s morals. After leaving Parker, the symbiote would jump to a few different hosts before bonding with former Army ranger Lee Price in the Marvel NOW! Run in late 2016. That particular version of Venom has been captured in this new ArtFX+ statue!

Posed in a dramatic crouching position with his enormous and lethal claws at the ready, Venom has always been the yin to Spider-Man’s yang. The statue is a 1:10 scale PVC display that includes magnets on the feet to secure to the included base. And in case that wasn’t enough to get you to pick up this beautifully horrifying statue, the detail included showing the symbiote flaring from Price’s body and elongated tongue protruding from the razor sharp teeth makes the piece even more terrifying.

Get this Venom ArtFX+ statue today and pair it with any of the other Spider-Man statues in the ArtFX+ line to really make your shelf amazing!

Collectibles Statues
Related ItemsArtFX+KotobukiyaMarvelMarvel NowSpider-ManStatueVenom
← Previous Story Funko Nicktoons Pop! Figures! Which is Your Favorite?
Next Story → Do You Know the Rules of Taking Care of a Mogwai?