The Pirates of the Caribbean franchise was filled with memorable characters, settings, and swashbuckling action. They also included some memorable ships. But the most iconic among them was the Black Pearl. Now Captain Jack’s ship has been captured in all of its glory in this highly detailed Master Craft Series statue.

This 1:144 scale Black Pearl statue has over 100 small parts and is expertly painted and crafted to look exactly like its movie counterpart. Below the boat, above the nameplate, the statue includes a little action with splashing water as the boat appears to crest the waves. The lanterns on the boat and the lighting in the cabin all illuminate when plugged in, giving, even more, depth to the incredible statue.

Captain Jack Sparrow’s ship is a must have for any Pirate fan or collector of awesome statues. The Beast Kingdom Black Pearl sculpture is a limited edition and comes individually numbered. Avast and set sail to Entertainment Earth to get yours now or there be a bounty on ye! I don’t speak Pirate very well but you get the point, get yours now! 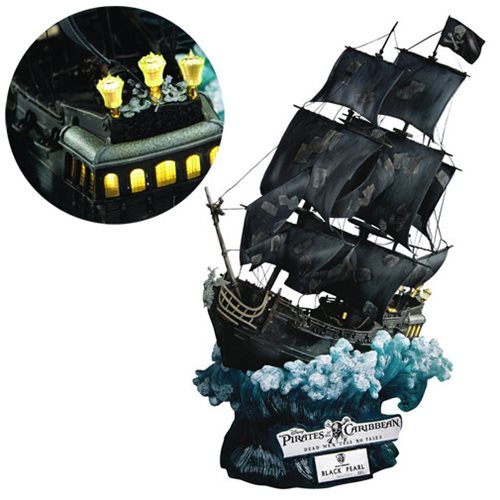