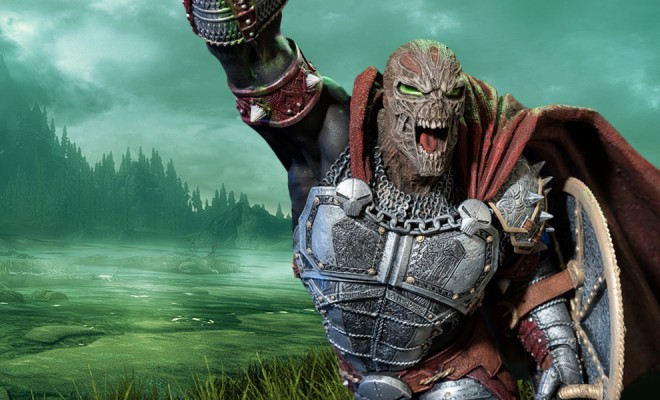 Rising from the depths of Hell after making a deal with Satan, the Medieval Spawn Resin Statue from McFarlane Toys is here to redeem himself in your collection.

Medieval Spawn was a knight who died on a battlefield in Freedonia and as punishment for his past deeds of killing and enjoying it, he’s sent back to Earth in symbiotic armor. He travels the realm performing good deeds as penance until eventually being slain.

The anti-hero is shown here in epic detail, rising his sword victoriously as he stands on the massive skull of his nemesis, The Violator. You can practically hear the figure as he roars into the ether, the clanking of his armor and chainmail bringing him to life on the battlefied.

The cold-cast resin statue also comes with an alternate helmeted head as well as an arm carrying a battle-axe. Even the base boasts plenty of detail, as well as a name sign for the character.

Each Medieval Spawn statue is individually numbered and comes with a certificate of authenticity from Todd McFarlane on a very cool marquee display.

Rise, and bring Medieval Spawn into your collection today! He’s currently available for pre-order at Entertainment Earth, expected to arrive in January 2016 with free shipping.