Face the Titans with Heroic Attack on Titan Action Figures 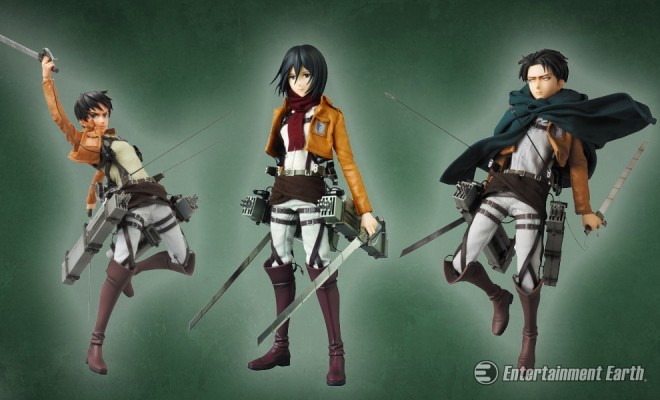 In the war against Titans, you need the best allies you can get… and there’s none better than the Attack on Titan Real Action Heroes figures from Medicom!

Three of the most popular and critical heroes to the cause are here and they’re ready to face the Titans.

After losing his mother, Eren Yeager dedicates his life to the eradication of the beasts who are destroying humanity. In a confident pose, Eren sports his Three Dimensional Maneuver Gear and Survey Corps jacket.

A genius and a prodigy, Mikasa Ackerman follows her childhood friend Eren into the Survey Corps and impresses everyone around her. She’s a stoic and quiet girl, expertly displayed on this figure, and also wears her Survey Corps jacket as well as her red scarf.

Last is the most powerful soldier and head of an elite squad, Levi. With his green cape billowing around his Survey Corps jacket, the figure shows him with a grim expression, ready to fight.

Each figure is 12-inches tall and comes with various accessories such as interchangeable faces, hands, and swords which can be placed inside the Three Dimensional Maneuver Gear. The costumes are realistically textured and each character can be posed with a movable display stand.

Don’t miss these highly detailed and faithful figures! They are currently available at Entertainment Earth with free shipping.