Not even Schulz’s retirement and death in 2000 could keep Charlie Brown and friends from entertaining America and the world. Many newspapers still feature daily and weekend reruns of the comic strip.

Beloved TV specials like It’s the Great Pumpkin, Charlie Brown and A Charlie Brown Christmas still show up to network audiences annually (despite being available at any time in today’s media landscape). The Peanuts Movie proved a big hit with critics and moviegoers alike in 2015.

And Charlie, Snoopy, Linus and Lucy, Schroeder, and the rest continue to show up on enough merchandise to fill even Snoopy’s seemingly infinitely internally spacious doghouse!

What makes Medicom’s new line of Peanuts Ultra Detail Figure (UDF) mini-figures extra-special is their charming “retro” look. These small vinyl figures, each one standing about 2 1/2-inches tall, capture the vintage look of Schulz’s “li’l folks” (the strip title the cartoonist preferred) from some of their earliest appearances.

The funny pages’ most lovable loser was present from Peanuts‘ beginning but didn’t start wearing his distinctive “zig-zag”-patterned shirt until over two months into the strip’s run (on December 21, 1950). This Charlie Brown figure features him dressed in the red shirt often seen in Sunday strips (with baseball cap and socks to match), instead of its more familiar yellow version.

We don’t always see Charlie smiling and greeting life with open arms. But his expression and posture reflect a fundamentally kind heart and positive spirit no amount of pulled-away footballs, tree-eaten kites, or lost Little League games can keep down for long. You are a good man, Charlie Brown! 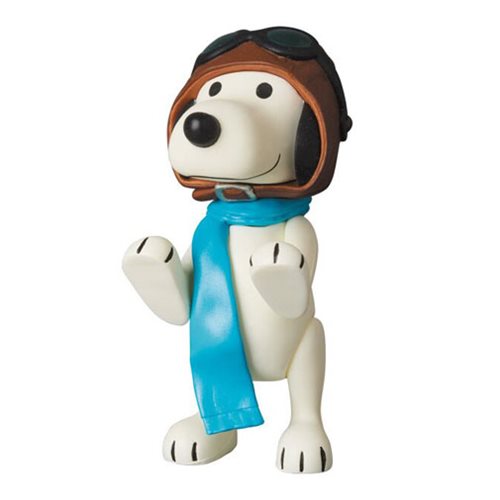 By the time Snoopy, the beagle with an irrepressible fantasy life, first fancied himself a famed World War I fighter pilot in pursuit of the infamous Red Baron, on October 10, 1965, he’d already evolved into the show-stealing pet who, more than any other character, defined Peanuts for most of the ’60s and ’70s.

This Snoopy figure presents the pooch (whom Schulz almost named Sniffy) wearing an aviator’s helmet, goggles, and scarf, but otherwise as he appeared in the strip’s early days. “Snoopy was the slowest [character] to develop,” Schulz once recalled, “and it was his eventually walking around on two feet that turned him into a lead character.”

Indisputably the most important female character in Peanuts (as she would be the first to point out), Lucy van Pelt first appeared on March 3, 1952. Schulz said the character gave him an outlet for his own sarcastic and crabby side. Her original cute, toddler appearance gave no hint she’d become the kid most likely to berate Charlie Brown for being a blockhead.

Medicom honors Lucy with two vintage-style figures. Both wear a pink party dress with violet sash, but one has her mouth closed in a smile, while the other – appropriately enough since she’s never shy to speak her mind – has her mouth open.

“Happiness is a Warm Blanket”

First mentioned in July 1952, Lucy’s baby brother Linus didn’t appear until September. He eventually became Charlie Brown’s best friend, as well as Peanuts‘ spiritual and philosophical spokesman. “Linus is strong enough to carry a strip by himself,” Schulz once said. “His biggest weakness, of course, is the blanket.”

Linus might take issue with his creator’s comment about the blanket. After all, Linus is famous for musing, “Happiness is a warm blanket.” This Linus figure presents him closer to his original toddler appearance, dressed in a red-and-white striped shirt, and coordinating red blanket in tow.

Beethoven or Bust for Schroeder

Schroeder, Peanuts‘ musical prodigy, debuted on May 30, 1951. He didn’t have his toy piano yet (a prop and running gag inspired by the toy piano Schulz’s daughter Meredith owned). But once he did, he never stopped providing high-class musical accompaniment for the kids’ adventures.

The Schroeder figure features Beethoven’s biggest booster in an appropriately themed orange sweatshirt – even though he objected to exactly that “commercialization” of Beethoven’s birthday in December 1960 strip! (Of course, Schroeder forgot Ludwig’s big birthday in 1957… and 1961… and 1967! So maybe having him wear something that would help him remember isn’t a bad idea.)

The kids (and dog) in the Peanuts gang have been cherished childhood companions for over 60 years and will continue to delight kids of all ages for decades to come. Celebrate their staying power by pre-ordering your own set of Medicom’s UDF Peanuts mini-figures today!