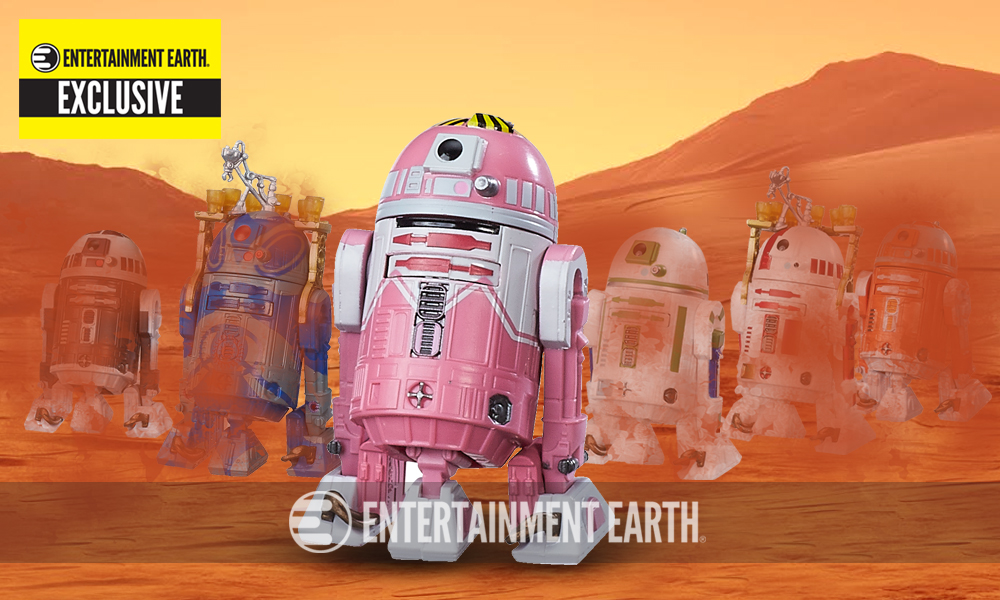 Star Wars has a huge fleet of astromech droids that have made their mark on the universe. It seems like, in many situations, a Jedi is only as good as the support they get from their astromech. From relaying messages to making repairs to hacking Imperial computer systems, astromech droids are one piece of equipment that can compete with the power of The Force.

Aayla Secura, Jedi Knight and member of D-Squad during the Clone Wars, created a powerful astromech to help her journeys across the galaxy. QT-KT is a pink droid with a feminine personality. QT-KT was created before Aayla Secura joined D-Squad, but she has been through a lot during the Clone Wars. If you take a look at the top her dome, there are yellow and black markers where upgrades were made during her time as a spy.

Unlike many of the astromech droids in Entertainment Earth’s exclusive Star Wars Astromech Droids 3 ¾-Inch Figure Collection, this is one droid that has had a lot of screen time. She is visible in several episodes of The Clone Wars, where some astromech droids are only discoverable in the shadows of feature films or as footnotes in the television series.

QT-KT was actually inspired by an original creation of Star Wars fans named R2-KT. She was made to honor Katie Johnson, the daughter of Albin Johnson, one of the founders of the 501st Legion. Katie was a cancer sufferer and R2-KT was made to help comfort her through her treatments. When the astromech was brought onto The Clone Wars, her name was changed into QT-KT in order to avoid the confusion of having two “Artoos” in D-Squad.

QT-KT is just one of six astromech droids in the Hasbro Star Wars Astromech Droids 3 ¾-inch Figure Collection that is exclusive to Entertainment Earth.