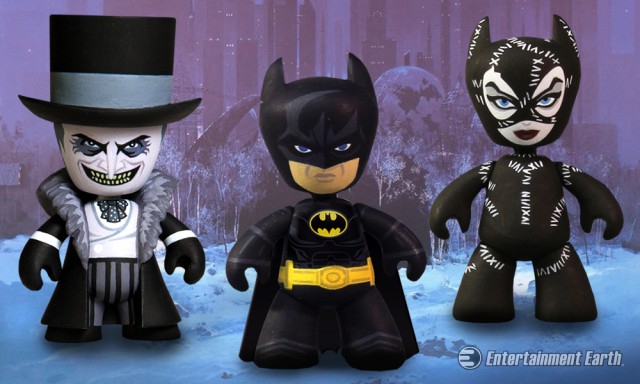 Batman is unquestionably one of the world’s greatest superheroes, which certainly guarantees he has some formidable foes as well. This boxed set features not only the Caped Crusader himself, but his frequent law-breaking adversaries, the deadly vixen Catwoman, and the subterranean criminal oddity, The Penguin.

Based on the record breaking 1992 film Batman Returns, each figure measures about 2-inches tall and features 5 points of articulation. Batman comes complete with his cape, and The Penguin comes with his removable top-hat and a sculpted coat to match his on-screen appearance. Catwoman’s outfit features asymmetrical stitching as seen in the Oscar-nominated film.

This cast of characters is the perfect collectible for any Batman fan. They may be small in size, but they pack a huge punch with their incredible design and detail.

Although the big black bat can fit in your pocket, you’ll want to prominently show him off in your collection. And these Mini Mez-Itz are packaged in a collector friendly window box suitable for display so you can do just that.