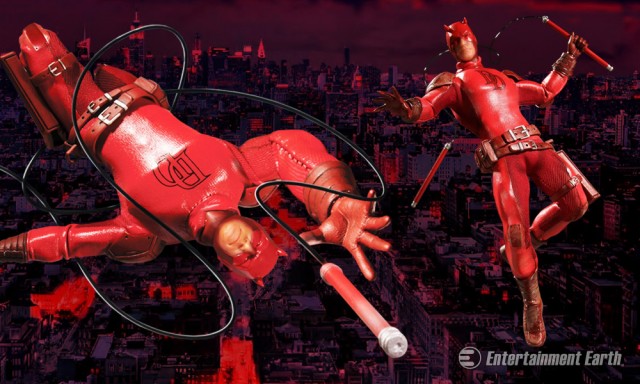 That’s definitely what we think Foggy would say about this stunning Daredevil One:12 Collective Action Figure!

That’s right, the guardian of Hell’s Kitchen has arrived, and he’s ready to dispense justice!

Wearing his iconic red suit, this Daredevil doesn’t run away from the fight and has the faces to prove it! Included among this intricately detailed figure’s accessories are three different heads to showcase Matt Murdock and his alter ego.

This vigilante would never walk into a fight unarmed either. To that end, Mezco also includes two sets of Billy clubs and four sets of hands, including a set of fists to punch would-be assailants in the teeth.

Our hero has 32 points of articulation and a posing post, but if displaying in the box is more your style, never fear! His collector-friendly window box will keep him safe from the elements while still being able to show of this awesome addition to your collection.

Our hero’s time has yet to come, but pre-order yours with free shipping from Entertainment Earth today and be the first to own this incredible figure in October!